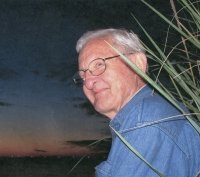 Gordon Garlick passed away on September 14, 2014. He was born on May 28, 1920 to Edward and Mary (Lopaz) on the family homestead in the Mt. View area. He was the fourth of five children. Gordon attended Ferndale Schools, graduating in 1938. He married classmate Marian V. Connery of Ferndale on May 28, 1941.

Gordon graduated from Washington State University School of Veterinary Medicine in 1944. He practiced in the Lynden area, Portland area, then overseas to Karachi and Lahore Pakistan in the 50’s, and in Bangalore India in the 60″s. He returned to retire in Bellingham.

Gordon and his wife Marian resided on Lake Whatcom since 1987 in a house they designed and had built. Gordon stayed active for many years and enjoyed activities on the lake. He built a steamboat named “Thrice” – for he did everything three times to make prefect-as anyone that knew him, knew was necessary.

Gordon was a member of the Bellingham Yacht Club for years, then later to the Northwest Steam Boat Society.

Gordon was preceded in death by Marian. They were married 63 years.

He is survived by his sister Theda and eight living nephews and nieces.

The family sends a special thank you to all the loving Doctors, Nurses and Caregivers for their care of Gordon over the years, especially the Hospice House in his last few days.