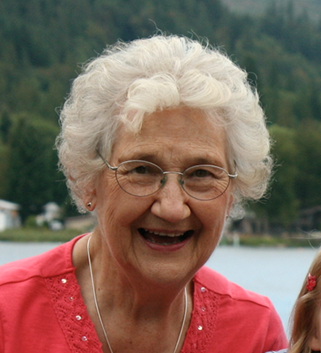 Born in Lynden on April 6, 1929, to Rudy and Hattie (Rademacher) Horat, she graduated from Lynden High School in 1947. After graduation, she worked for her brother-in-law’s dealership in Lynden. She married Jim Roe on April 1st, 1948 and in 1954 they moved to Bellingham.

She worked a variety of jobs, all designed to have her home after school so she could take care of her children. She then started work as the cook at Assumption School for several` years while her children were in attendance there. In 1979 she decided to start her own successful business, Northwest Bookkeeping, and continued self-employment until around 1998. She remained in the family home until 2011. She was a member of St Joseph’s Catholic Church in Ferndale and volunteered there as well as at St Joseph’s Hospital in the gift shop for many years.

Bette was active with her children’s schools, her church and her community. She helped run fundraisers for Assumption School, notably the Harvest Festival; she was involved in church choir, and in later years worked with Lifeline through St Joseph’s Hospital installing emergency call units in the homes of the elderly and shut-ins.

Bette was talented as a cook, noted for her spaghetti and homemade bread (this spaghetti, which she served for thousands, will be also be served at the reception), her sewing, especially her home made quilts, and her confectionery skills in making homemade candy. She had gardens for many years and canned fruits and vegetables for her family as well as Swiss pastries she made from recipes she got from her father’s sister.

A celebration of Bette’s life will be Friday, April 8 at 11:00 am at St Joseph Church in Ferndale, with a reception to follow, and a later burial at Woodlawn Cemetery.

In lieu of flowers please donations can be made to Assumption Catholic School in Bellingham attn: Phoebe VanDerboom