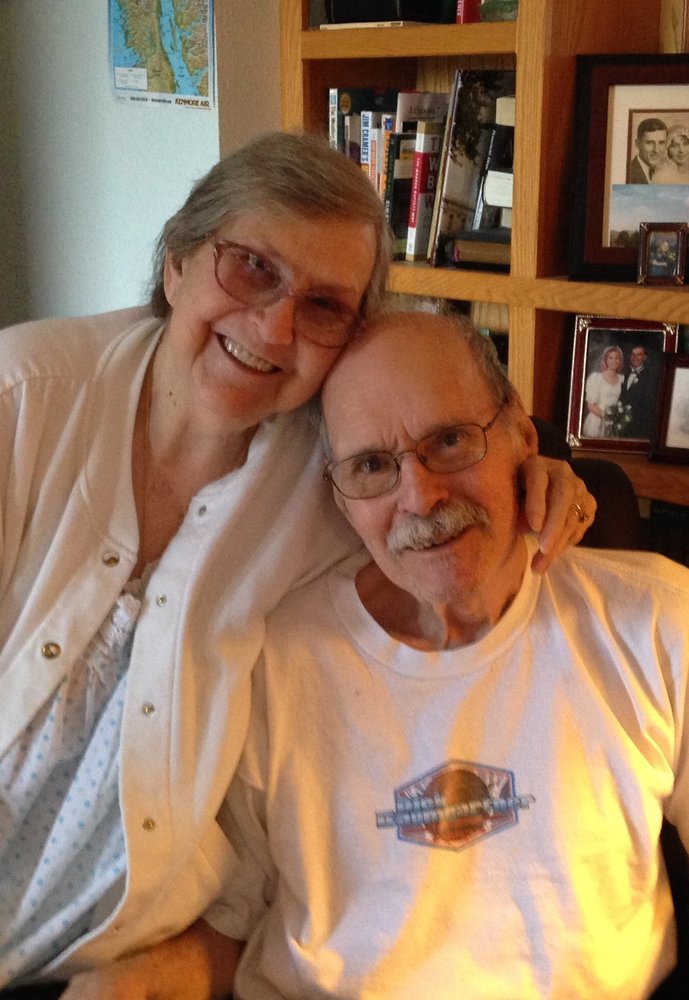 Together is Where We Want to Be.

A wooden plaque with that simple saying hung above the beds of Bob and Joy Bennett during their final days at Lighthouse Memory Care Center. Their togetherness started in Bellingham in the late 1960s and in a spiritual sense didn’t end with their deaths, about seven hours apart on Feb. 2 in Anacortes. They had lived their dream, shared a unique bond, for half a century.

Simply put: they just never wanted to be apart.

His death had been impending for weeks. Her death was most likely from a broken heart.

Together is Where They Wanted to Be.

Bob’s life slipped away under the hourly care, hugs and heartfelt support at the Lighthouse, his death finally the result of a heart disease and failed intestinal surgery that many doctors predicted would kill him many years before. Bob and Joy had moved into the Lighthouse together on Feb. 5, 2017 as Joy was recovering from a broken hip. Bob’s health was slipping mentally and physically and they both needed care for daily living. The Lighthouse became their home and the caring staff became additional members of their family. They were loved in return like family. Joy socialized with many friends over meals, coffees and music at the Lighthouse.

They missed the life on Orcas, of course, as their relatives and friends missed them. They missed their dog, Toby, and the many animals that came to visit their lots each night. Toby found a wonderful new home and the deer continue to roam. Bob and Joy still had a lot left to share in that final year, including humor and good cheer and Bob’s traditional “light fare” request for in-room suppers.

Together is Where They Should Be.

The care provided at Lighthouse meant a great deal to relatives, who exclaimed time and again that together is where they should be.

Bob had “graduated” from Hospice once, gaining strength from the Hospice workers who rode the ferries to visit him regularly on Orcas Island. He would crawl from his bed and await their arrivals with a smile as he sat in a recliner where he often watched boats and kayaks travel toward Sucia Island and planes land at the airport. It became obvious after a year in Hospice that he wasn’t ready to leave Orcas and this world, no matter his pains and physical limitations. He persevered, it was also obvious, because he couldn’t imagine life without Joy. Those feelings were definitely mutual. She couldn’t imagine life without him. That belief takes on deeper meaning when realizing that her death was highly unexpected on the evening of Feb. 2.

Together is Where They Will Be … through Eternity.

Their imprint will be cemented together forever, like the impression on the bed that was created as they held each other through his final hours.

Bob’s brother, Gary, staff members at Lighthouse and friends from Orcas were among those amazed at the calmness and the forward vision that Joy expressed, among the tears of course, after “her Bobbie’s” passing. “He’ll be there waiting for me,” she said many times, expressing her belief in heaven — and that true love does, indeed, last forever. Little did anyone know that “her Bobbie’s” waiting would not be for long. She died that evening from a sudden stop of the heart. He had just turned 87 and she was nearing 92.

They were together again. Forever.

There is historical truth to broken-heart deaths. It happens often enough that is defined as a syndrome in medical fields. But, seldom do deaths occur this close together. There is only one way to look at that: It was meant to be. It was meant to be, too, for Bob and Joy to make a home on Orcas in 1991.

Bob and Joy’s life together

Joy was born May 2, 1926, in Bellingham to Vert and Elizabeth Eason. She lived much of her childhood there and in areas closer to Mount Baker. She lived much of her early adult life in Alaska and on Lummi Island. Bob was born Jan. 29, 1931, to Robert W. and Edna Bennett of West Seattle, where Bob lived until entering the Air Force in late 1950. He moved to Bellingham in the mid-1950s after joining the phone company, which had been a family tradition dating back into the turn of the 19th century. Bob and Joy met in the late 1960s.

Robert fell in love with Orcas while working for months as a microwave engineer for Bell Telephone in helping the island (and others in the San Juans) recover from the effects of the Columbus Day storm in 1962. He worked regularly for many years afterward in the little building that sits just outside of The Lower Tavern in downtown Eastsound. As a small-plane pilot, Bob loved Orcas’ pioneering history in aviation. He and Joy loved the small-town feel of Eastsound and the caring spirit of islanders.

She became enamored with Orcas, too. She had visited there many times with her sister and brother-in-law, Lillian and Frank Rouleau.

Bob meticulously planned their house on Alder Street. Frank helped them lay the foundation and the driveway for their dream home.

Soon after moving in, Joy’s oldest daughter, Kathy Eastman, came to join them and make a home and education career on the island. She married Orcas native Ed Eastman.

Bob and Joy loved to help others and to entertain. He regularly trimmed the grounds at the American Legion — and neighbors’ yards — with his riding mower and helped members of the Lions Club harvest trees that provided free firewood for the needy. She volunteered at the library and the senior center and also worked for several years as a nail technician. She planted and grew amazing things in the backyard on Alder Street. She could identify all of the birds that landed on their back porch.

Bob served in the Air Force from 1950-54 in England and France during the Korean War. He was employed nearly 40 years for the phone company. He was a life member of the Moose and Elks lodges of Bellingham and a life member of the Telephone Pioneers of America. He also was a member of American Legion, Orcas Lions Club and the Power Squadron. He loved bowling, golfing and talking with his many friends.

Creating a blended family together

Bob is survived by his brother, Gary Bennett, of West Seattle, daughter, Joyce Higman (Bruce) of Missouri and son, Mike Bennett who came to live on Orcas as a resident caregiver for Bob and Joy for four years. Mike now resides with his wife, Wendy, in Springfield, Mo.

There is no way to complete Joy and Bob’s story without thanking some of those who helped them so much in their final years. They include Dr. David Russell and his caring staff on Orcas Island; director Laura Willingham and everyone at the Lighthouse; staff at Orcas Island Physical Therapy; and Christine, Dena, Sarah, Jan and several others at Hospice of the Northwest. They also include Butch Norton, Karla Rieg, Sue Douglas (Rankin), Melanie Davis and other amazingly caring friends and neighbors.

Bob and Joy’s family would be honored for any gifts given to the Orcas library or senior center in their names. Gifts also would be appreciated to the Bennett Scholarship at Indiana University East in Richmond, Ind., which honors Bob’s son, Steven, who died in 1972. The scholarship is designed to help people who need second chances and new directions in their lives and careers. IU East’s address is: 2325 Chester Blvd., Richmond, IN 47374.

Memorial services for Bob and Joy Bennett are expected in late spring or early summer.