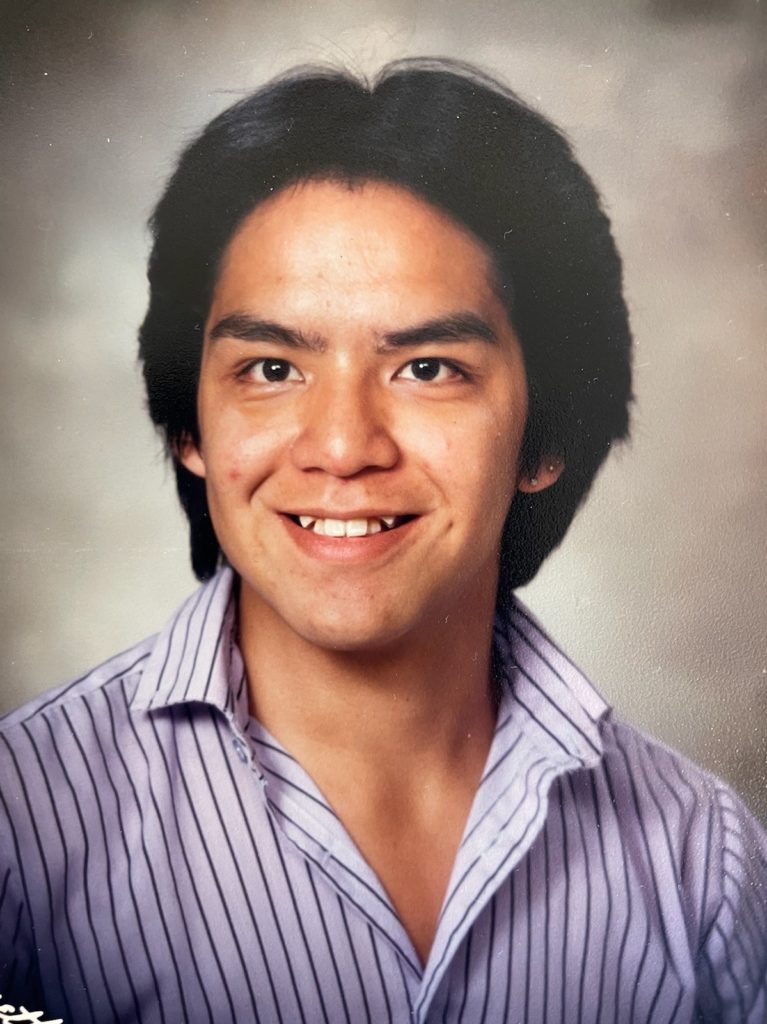 Whooola! (that was one of Ritchie’s favorite things to say), not to mention he would ring your doorbell a few times to announce his arrival. Ritchie wasn’t a veteran, but boy was he a soldier. No matter how hard it got over the final months of his life, like a tough soldier he fought, and fought hard.

Ritchie blessed the Thomas and Peters clan when he screamed his first screams into this world on February 9th, 1969. Ritchie was the 2nd youngest, born to the late June Thomas-Lumbert and Leonard Peters. Ritchie’s two older siblings: Mike and Carol as well as his three younger siblings who lived with him: Brian, Brandon, the late-Guy all grew up with Ritchie and saw how unique he could be.

In the summers, you could find Ritchie with his siblings down near the Stommish Grounds at late Auntie Edith and Uncle Vic’s property. He, along with boys and girls from the: Finkbonner, Toby, Jones and Scott families would goof around and play sports while his late mother June who was a single mother, Auntie Della and the ladies would get together and enjoy time together.

Just like his late-dad, Ritchie loved sports. It didn’t matter what sport he played, his competitive nature always made things interesting. Whether he made a play on the tennis or pickleball court, scored the highest in Yahtzee, beat you at chess or took your money as a table games dealer, Ritchie had that wiley smile on his face. His big eyes and whistle as if to say ….damn I’m good.

Oh, and don’t try to bet against the Atlanta Falcons, even if your team wears blue and green. Sure, the Seahawks were his second favorite team, but when they played head-to-head, it was HOT-lanta every time for Ritchie.

His favorite people in this world is his large family and his prized treasure wasn’t his coin collection—what made him so wealthy was his beautiful kids and grandchildren: As Ritchie’s health began to fade, he worried most about them. Many of us believe that Ritchie held on as long as he could for them.

His son Optimus Prime remembers how his dad would give him a taste of his drink and Optimas would drink the whole thing so Ritchie called him his brat. Ritchie in his humorous way liked to annoy you so he would tug at your shoulder sleeve or snap his fingers to get your attention and show you the OK sign. If you saw it, he got to punch you on the shoulder.

Being a part of a team was another theme in Ritchie’s life. Whether he was a part of a historic hardball baseball team that helped bring a championship to Lummi as a teenager or more recently helping his billiards team win a trophy, there was Ritchie–you could always depend on him to help the team win.

Ritchie was a simple person who enjoyed the most simple things in life. Whether it was finding enjoyment in watching TV shows: The Deadliest Catch, Forged in Fire, or Finding Bigfoot. He watched WWF and WWE, especially each year’s Wrestlemania which Ritchie felt was paying respect to his late baby brother Guy who loved to watch wrestling too. Ritchie recently shared Facebook images of antique classic cars and would sometimes text Carol a picture for her to show her husband Jim. Yup, Ritchie was amazed in the most basic things of life.

In the last few years of his life, Ritchie found peace in his many walk-abouts, taking a full afternoon for a nice walk—to think about things and to help improve his breathing. Pauline, his girlfriend remembers many times walking at his favorite place, the Boardwalk at Boulevard Park. She also remembers the many times he would accompany her to many places to find high-quality beads or the many times they casino hopped.

Many would say a nice vacation would be to go to Europe, Hawaii or Disneyland. Ritchie? Just before he passed away on July 17th, he wanted to take a vacation to the Oregon Coast. That was Ritchie. Nothing flashy, nothing fancy, just nice and easy. That was Ritchie, a very nice and easy-going person—someone so many people loved to be around.

The large Thomas family—as loving and as tight-nit as they are, know how hard this has been for them. No one in this family is replaceable and it will be very hard not to see Ritchie at the family gatherings or having someone laughing at you when he beat you.

We’ll miss our Magoo, Our Sukka, Our Sukka Fish, our LaBamba, Ritchie Rich, Carnal, Ritchie Bird. The faith this family has believes that he’s in a better place, no more suffering, no more sorrow. We love you Ritchie, may God rest your soul.

“I have fought the good fight, I have finished the race, I have kept the faith.”

Don’t grieve for me for now I’m free,
I’m following the path God laid for me.
I took His hand when I heard Him call:
I turned my back and left it all.

I could not stay another day
To laugh, to love, to work or play.
Tasks left undone must stay that way;
I found my place at the close of day.

If my parting has left a void
Then fill it with remembered joys.
A friendship shared, a laugh, a kiss,
Ah yes, these things I too shall miss.

Be not burdened with times of sorrow:
I wish you the sunshine of tomorrow.
My life’s been full, I savoured much;
Good friends, good times, a loved ones touch.

Perhaps my life seemed all too brief:
Don’t lengthen it now with undue grief.
Lift up your heart and share with me;
God wanted me now, He set me free.