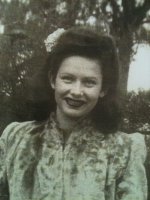 Patricia Lee Glahn, age 88, passed away in Bellingham, WA on February 6, 2013. Patricia was born to Guy and Mabel Ruby on August 15, 1924 in Ringold, NE. After graduating high school as valedictorian, Patricia became a teacher, church secretary, B17 riveter during WWII, and married the love of her life, Raymond Merrit Glahn.

Patricia was preceded in death by her husband, Raymond Glahn, on August 22, 2003. A true selfless heart who will be forever missed.

There will be a memorial service on Sunday, February 10th at 1:00PM, in the chapel at Greenacres Memorial Park, 5700 Northwest Dr., Ferndale, WA. Donations Information