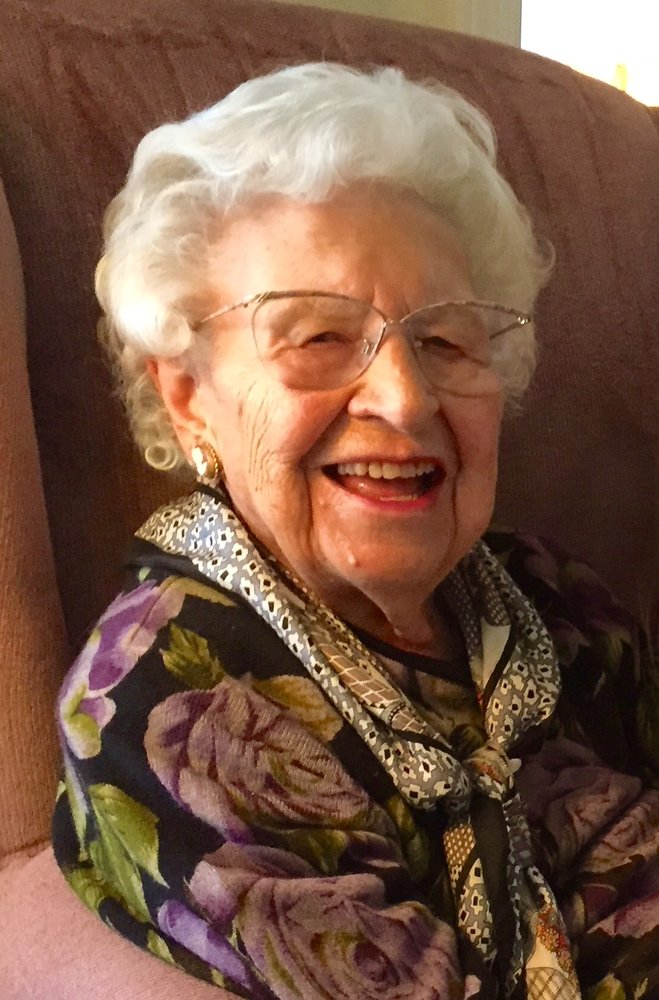 Olive Frances Maloney Widdifield Keyes was born March 21, 1915 in Weyburn, Saskatchewan, Canada and grew up in Regina. After graduation from Regina Collegiate Institute, her family moved to North Dakota where she graduated from North Dakota State College in Fargo with a Bachelor of Science degree.
She taught school in Minnesota and in 1939 married Wallace Widdifield. They lived in several places throughout their married life including Starkville, MS; Atlanta, GA; Beaver Dam, WI; Shawano, WI; Blackfoot, ID; Green Bay, WI; Lynden, WA; and River Falls, WI. Together Wallace and Olive raised 5 children, twin sons, Robert and Richard Widdifield, daughters, Mary Marques and Margie Kimberley, and son, John Widdifield. A daughter, Dorothy Alice, died shortly after birth. Olive lost her son, Richard in 1988 and his twin, Robert in 2015. She also leaves behind loving sons-in-law and daughters-in-law, 11 grandchildren and 11 great grandchildren.
Olive dedicated her life to her family, and was an active participant in their school lives. She organized the first PTA in the Lincoln School in Shawano, and worked with both Girl Scout and Boy Scout troops during her children’s years. In Green Valley, AZ, she belonged to the Palo Verde PEO, AAUW, and the Green Valley Community Church.
After Wallace’s death in 1975, she traveled extensively in the US and abroad and was active in her church and PEO in River Falls, WI. In 1983 Olive married Gordon H. Keyes of Shawano, WI and they settled in Green Valley, AZ together to enjoy their retirement years.
Following Gordon’s death in 1995, Olive moved to the La Posada retirement community in Green Valley where she enjoyed many happy years. Last year she moved to Bellingham, WA to be near her children and passed away at 101 years of age on April 18, 2016.
Olive loved many things – first and foremost, her family, especially the little ones. Born an only child she wanted and valued a large family and throughout her life made family a priority. Gatherings with them brought her deep joy. She was a talented and award winning artist, a wordsmith and a savvy bridge player who was inspired by poetry, travel, nature, humor and friendship, and who valued education, life-long learning, staying in touch with family and friends, and a good joke. Her family is deeply grateful for all the lessons and gifts she left us, and for all the friends who were so good to Olive.

A Celebration of Olive’s life will be held at three pm on Saturday, April 30th at the First Congregational Church of Bellingham, Washington.

Memorial gifts may be made in Olive’s name to The American Association of University Women/AAUW at ww2.aauw.org

FROM A NAVAJO PRAYER

Every creature – whether it knows it or not seeks repose.

FROM “THE PROPHET” BY KAHLIL GIBRAN

In the depth of your hopes and desires lies your silent knowledge of the beyond;
And like seeds dreaming beneath the snow your heart dreams of spring.
Trust the dreams, for in them is hidden the gate to eternity.