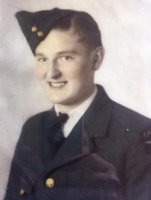 Ira Bryson Hatchard, 91, of Redmond, WA passed away on June 6, 2013 in Kirkland, WA. He was born on Feb. 23, 1922 in Windsor, Nova Scotia to Archibald and Frances Hatchard, the sixth of eight children. Ira served in the Royal Canadian Air Force during WWII in England where he met his wife Joyce. They were married in Windsor, England on Dec. 5, 1944 and remained happily married nearly 65 years. After the passing of his beloved Joyce in 2009, Ira was fond of recalling her memory and frequently entertained family and friends with photos and stories of their eventful and romantic life together.

An accomplished businessman, Ira was an insurance adjuster who rose to become a regional and district manager for the General Adjustment Bureau. His work took him and Joyce to numerous cities including Bellingham, Yakima, Seattle, WA, Great Falls, MT, Phoenix, AZ, Minneapolis, MN and San Francisco, CA. Ira was also a lifelong member of the BPOE, which held great importance for 58 years of his life.

Dad (Grandpa/Great Grandpa), we love you and will miss you but are comforted by the knowledge that you and Mom are together once again.

A graveside memorial service will be held at Greenacres Memorial Park at 2 PM, June 28, 2013. You may share memories of Ira in the online guest book at www.farewelltributes.com. Donations Information