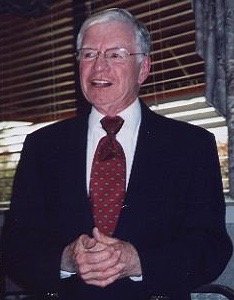 George Frederick Lankow was born in 1924 in Rutherford, New Jersey, to Frederick and Katherine Carroll Lankow. After graduating from Rutherford High School, he enlisted in the Navy and served in the Pacific in World War II. He attended Cornell and graduated from Newark College of Engineering. He worked for Minneapolis Honeywell on the manned space capsules and the space shuttle. He holds a patent on a control apparatus used by NASA. He often remarked that he went from a kid who watched Buck Rogers at Saturday matinees to helping to make the Apollo moon landing possible – science fiction to reality in one lifetime. After relocating from Minnesota to Washington, he worked for Boeing on commercial and military aircraft.
George was a lifelong learner. He read voraciously and took online college classes after he retired. A gifted high school athlete, he skied into his late sixties and did daily gym workouts into his late eighties. He loved wilderness hiking, parks, and gardens. He was an active member of the King County Iris Society and a certified American Iris Society judge.
Friends and family were the most important things to George. He was married to his wife Carol for 40 years until her death in 1990. He is survived by their children Andrea (Jeffrey), Paul (Rosalie), Karen (Jeff), and their grandsons Jesse (Breezy) and Joe (Brenna). He is survived by Carla, his wife of 24 years, her children Larry (Christine), Mark (Vicki), Karen (James), and her granddaughters Robyn, Sonya, and Devin.
SERVICES: Friday, Jan.29 1pm – natural burial at Greenacres in Ferndale, WA. Saturday, Jan.30 11am – memorial service at the Newcastle Country Club. In lieu of flowers, contributions may be made to the American Cancer Society, the Alzheimer’s Association, or the charity of your choice.