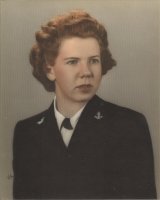 Old Settler, Ellen M. Gilbert passed away peacefully on Oct. 2, 2012 in Bellingham. She was born on Feb.18, 1919 to John and Ruby Blick. Ellen was a graduate of Custer Union High School, class of 1937, and of Western Washington College of Education in 1941. She taught for three years in Mukilteo and Ferndale. After Pearl Harbor, Ellen felt she needed to help her country. In June of 1944 she enlisted in the WAVES. She attended basic training at Hunters College in New York, and was then sent to The Great Lakes Training Center where she learned aerial gunnery, which she then taught in San Diego. Ellen was one of a very few women who qualified for this type of duty. For her service she received the WWII Victory Medal. In San Diego she met the love of her life, Charles Gilbert Jr., Electricians mate 2-c class U.S. Navy. They were married at the Wedding Bell Chapel in San Diego on August 25, 1945. In October of 1945, both Ellen and Charles received honorable discharges from the Navy. They moved to Ferndale where they raised three children. Until their retirement, Charles and Ellen owned and operated Chucks TV on Main St. in Ferndale. Ellen was active in the American Legion Post 154 Auxiliary. She enjoyed genealogy, reading, gardening and traveling with her husband.

Ellen is preceded in death by her parents, her brother Donald Blick, and son Randolph Gilbert aka Gilby.

Ellen is survived by her sister Maxine Meyers of Hermiston, OR, son Grant Gilbert (Connie) of Ferndale, daughter Cherl Brandt of Custer, grandsons Andy Brandt of Seattle and Chris Brandt (Monisha) of Bellingham, and great-grandchildren Marshall and Sydney Brandt.

The family would like to thank Silverado Senior Living for their wonderful care of Ellen.

A private family graveside service will be held at Enterprise Cemetery in Ferndale. Donations Information

Memorial donation may be made to the American Legion Post 154, PO Box 1296, Ferndale WA.