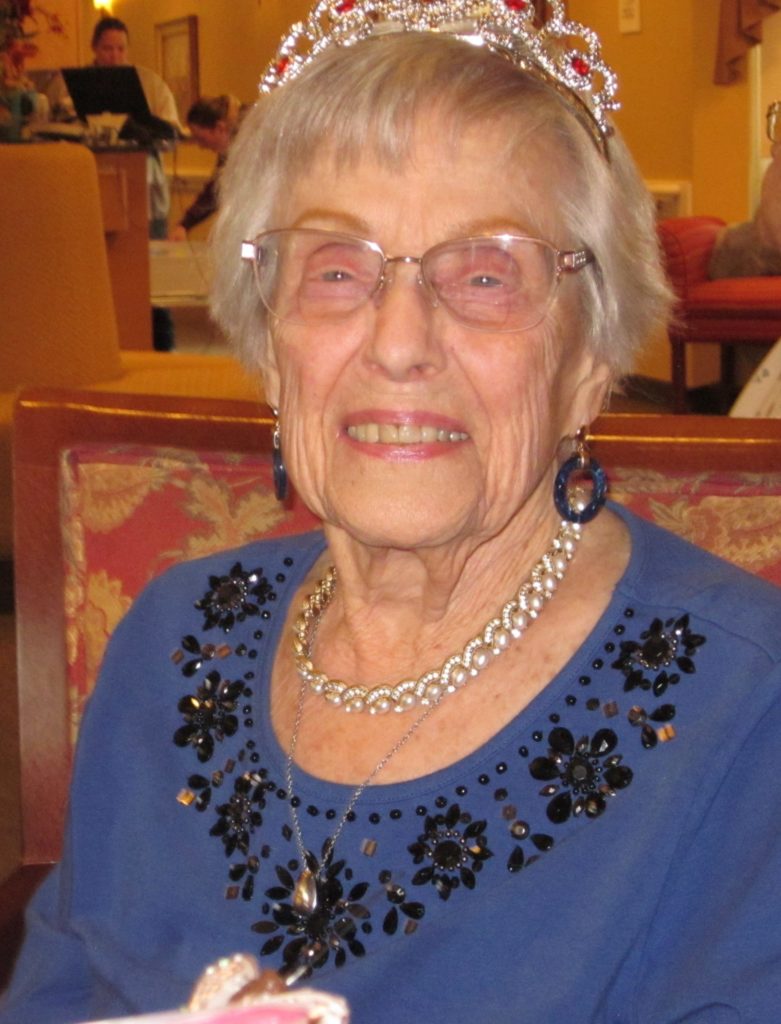 Barbara Joyce Miller, age 91, passed away on July 28, 2021 in Bellingham, WA. She was born on November 1, 1929 in Seattle, WA to Eugene Francis and Iva Mae (Bradford) Miller. Known as BJ in her younger days, she attended Bryant Grade School and graduated from Roosevelt High in 1947. She married Eugene “Gene” Bates in 1951 in Seattle. Together they had three children: Douglas, Terry, and Stuart. They lived in their house in Olympic Manor until 1969 when Gene was transferred to Bellingham to manage the JC Penney store. A short time later they divorced and BJ, now Barb, started working at Dr. Myhre’s Optometrist Office on Girard Street. She was bookkeeper and office manager until her retirement after 30 years.

Barb met Dennis Brewer through their daughters’ friendship. Barb needed her car repaired after an accident and was recommended to Dennis, who worked at D&L Body and Plastics. She met him to get an estimate and have her car fixed. That led to dating and marriage on June 10, 1972. For the rest of their days, Barb’s favorite thing was walking hand in hand with Dennis wherever they went. With a new blended family of Dennis and his four daughters: Teresa, Carol-Anne, Valerie, & Rhonda, they moved into a home near Lake Whatcom in the Silver Beach area. Barb and Dennis remained in the home long after all the kids had left, maintaining the house and gorgeous backyard for years.

Barb was well known for her beautiful roses and flower garden and could be seen out back during the summer tending to her flowerpots, hanging baskets, and a vegetable garden. She received many ribbons for her roses and flowers at the Lynden Fair. Barb was a sun worshiper: she often said she would tend to the housecleaning only when the weather was bad. Her beautiful garden showed all her knowledge and tireless work.

Barb always kept busy with her children’s activities. She was Den Mother for Cub Scouts, Girl Scout Leader, Room Mother for Special Ed for deaf children, 9 years active in PTA (president for 2 years). She was a “hockey mom” for both Bellingham minor hockey and Aldergrove minor and attended most Bellingham Blazer games.

Barb enjoyed helping others, volunteering with Hearing Limited for families of deaf children, co-chairing the Heart Fund, serving as board member for the March of Dimes, and as a member of the Whatcom County Arthritis Foundation. She helped organize “EARS” screening equipment for hearing and was a library and teacher’s aide thru Whatcom Volunteers. Barb spent 12 years with the Whatcom Literacy Council working with students to learn English and preparing them for citizenship, obtaining passports and registering to vote.  She received the PTA “Golden Acorn Award” and the JC Penney Volunteer Award.

Barb enjoyed hosting family get togethers for picnics, birthdays, and Christmas parties with a full house. Among her interests, old and new, were playing bridge, ice skating, camping, sewing, dancing, decorating cakes, watching sports, traveling, jazz music events, cats, gardening, and flowers. Barb and Dennis also enjoyed traveling in the states, Canada, Mexico, and Europe. They were both members of the Elks Club, and Yacht Club and could be seen there most Friday nights.

They were active members of the Bellingham Traditional Jazz Society, volunteering and attending most events here and away. Barb was Secretary for the monthly “Jazz Me News” newsletter and spent time gathering and organizing articles for the printers and mailings. Barb and Dennis would provide the snacks for the ‘goodies’ table during the monthly event on the first Saturday of the month at the VFW in Bellingham. They enjoyed music of the Puget Sound Jazz, Bob Storms and His Dixieland All Stars, and so much more. They donated to and supported the jazz youth program. Years after Barb’s Jazz duties ended, she attended a Jazz event just before COVID started. She was as delighted to see the band and many of her friends as they were to see her. During the Jazz, there was an announcement acknowledging Barb as a special guest. She even got a special dance. Barb was thrilled and back in her “Happy Place.”

Barb has lived a long, full life and is back together again with her loving husband Dennis. Barb was preceded in death by Dennis (2017), and her sister and brother-in-law Phyl & Richard Mauritsen.

You are welcome to join family and friends at Moles Farewell Tributes-Bayview Chapel in Bellingham on Tuesday September, 14 at 2:00pm to Celebrate Barb’s Life.