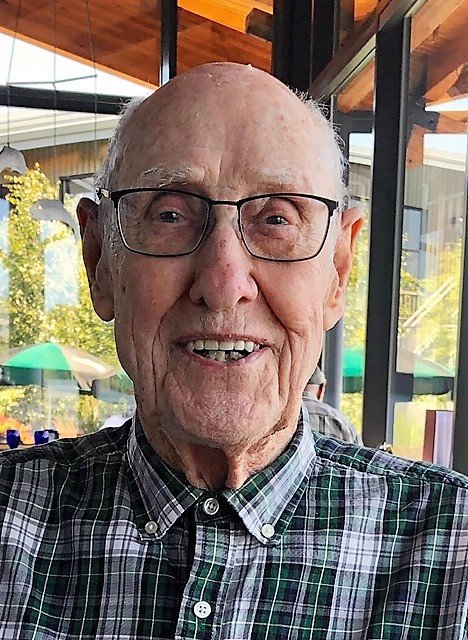 Thomas Bartlett Meyers, age 97, long time resident of Camano Island, Washington and Grafton, Ohio passed away peacefully on February 12, 2019 at Mt. Baker Care Center in Bellingham with his family by his side… just the way he would have wanted it.
Tom was married for over 70 years to Katherine Pomeroy Meyers who passed away in 2017. He was a devoted father to his two daughters Sue (Phil) Sharpe of Bellingham and Barbie (Dave) Tatman of Rockfield, Kentucky and grandfather to five beloved grandchildren, Katie (Adam) Kortlever, Claire Sharpe and John, Phil (Erin) and Parke Tatman. He welcomed his first great grandchild, Avalon Kortlever, into the family in 2018. He is survived by his nephews Buddy Meyers, Dan and Mike Cyr, Jim Marshall and nieces Janet (Marshall) McBride and Diane (Marshall) Neste and numerous great nieces and nephews. In addition to his wife Kay, Tom was preceded in death by his father and mother Francis and Henrietta Meyers of Lyman, WA and his brother Charles (Bud) Meyers and sisters Marian Meyers and Bertha Cyr.
Tom was born at home in Lyman on November 7, 1921, the youngest of four children. He cherished his years growing up on what he respectfully referred to as the “Mighty Skagit”. He graduated from Sedro-Woolley High School in 1939 where he was an active on the tennis team and played saxophone in the high school band. He remained forever loyal to his Sedro-Woolley Cubs and his love for music developed in high school became a lifelong passion.
After graduation Tom moved to Seattle and worked for Boeing and learned the skills that equipped him for his Navy service as a flight mechanic at Pearl Harbor during World War II and as a Navy Reservist in the Korean War. After the war, Tom married Kay Pomeroy on June 28, 1946 in Seattle, WA. They started their married life in Honolulu where Tom worked as a flight mechanic and pilot for an interisland flight service. When Tom and Kay returned to Seattle, Tom started work at Ravenna Metal Products with Al Moen, who developed and patented the single handle faucet. The founding and relocation of Moen Faucet Company to Elyria, Ohio in 1956 defined the rest of Tom’s professional life where he served as Production Manager for the next 28 years.
Tom and Kay raised their daughters in Grafton, Ohio where they developed a network of close friends, and warmly welcomed Susie and Barbie’s friends into their home while growing up. Tom continued his love of flying and owned a Piper Cherokee with friends and was the official flight mechanic. His passion for music ignited an interest in the Hammond B organ which filled the Meyers’ home with music and frequent neighborhood sing-alongs. When not working, flying or playing the organ you could find Tom and his buddies fishing for Walleye on Lake Erie and Northern Pike in Canada.
In 1984 Tom and Kay retired to Camano Island, WA. They were active in Camano activities and developed a great community of friends that centered around Camano Country Club where Tom served on the board and as the unofficial director of maintenance. Tom loved the beach and when not crabbing or digging for clams was fishing out on the bay or nearby lake. Tom had a very special place in his heart for his grandchildren. He was a patient teacher, whether untangling fishing lines, helping with a project in his shop, encouraging their dreams or sitting with them on the back porch drinking root beer and teaching the fine art of belching. They loved and admired their GPA.
Tom was disciplined and precise in every project he took on whether in his professional life or at home. Detailed records were kept and preventive maintenance plans were followed. He adopted the principle that anything worth doing, was worth doing right. Yet his orderly life did not interfere with his love of life. He embraced life’s opportunities and everyone he encountered along the way. Tom and Kay lived their last years in Bellingham close to family and the care they needed. For Tom that meant navigating the frustrations of advanced dementia. Regardless of his circumstances he had a smile for everyone, was grateful for their care and support and was a kind man until his final day.
Tom’s memorial service will be held at a later date when family and friends can gather to honor his remarkable life. Donations in Tom’s memory can be made to Camano Island Fire and Rescue Volunteer Program (Mabana Firefighters) 811 N. Sunrise Ct., Camano Island, 98282.