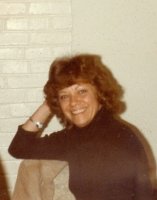 During the early morning hours of Sunday February 3, 2013, while sleeping in her bed, Peggy Linn went home to be with the Lord. She was 69.

Peggy was born August 16, 1943 in Anacortes, WA to Earl and Peggy Linn. The family moved to Bellingham soon after. She lived the majority of her life in Whatcom County.

A hard worker from an early age, she valued her many opportunities with employment, including being a housewife and mother, meter maid, hair dresser, longshoreman, and a crew member for Washington State Ferries. By obtaining her Merchant Marine certificate, she was able to work as a cook on ships for Arco and Crowley Intl.

In her later years, she thrived on her volunteer work. She cut inmates hair in Canada through the B.C. Prison ministries, ministered to the elderly in convalescent homes with her dog Bear, and volunteered as a tour guide in Ferndale at the Hovander Homestead.

Of all her volunteering, her passion was her work in Mexico where, over the years, she devoted her love and time to providing basic needs to the Tarahumara Indians.

A memorial service for Peggy Ann Linn of Ferndale will be held on Saturday, February 16, 2013 at 3:00PM at Freedom Church 7011 Hannegan Road, Lynden; mile North of the East Pole Road (Green VFW Hall). Pastor Dan Cook will be officiating.