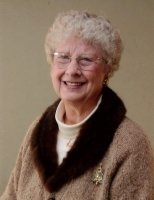 Lorraine M. Smith, age 87, passed away December 26, 2013 in Bellingham, WA in the loving arms of her family. She was born April 30, 1926 to Frank and Gunhild Hatley in Bellingham, WA. Lorraine was a Mt. Baker high graduate and worked many years at Stokley VanKamp. She was preceded in death by her husband Kenneth R. Smith and brother Lowell J. Hatley. Lorraine is survived by her son Jerry D. Smith and his wife Paula of Everson, daughter Janet D. Sims and her husband Lance of Sedro Woolley, grandchildren Chad Smith, Nicole, Bridgitte and Caleb Sims.
The house Lorraine was born in became occupied by her future husband years later. They were married for 55 years during which the two of them enjoyed traveling throughout the United States in their motor home, numerous trips to Hawaii, but one favorite vacation destination was Disneyland. Her main hobbies included her four grandchildren, needlepoint, embroidery, and oh the tales she could tell of her jet ski. Lorraine was a huge sports fan of the Seattle Sonis, Mariners, and Seahawks. If you knew Lorraine, you knew her favorite dessert was banana splits. Lorraine was a kind spirit, always caring and helping her friends in their time of need.
A family burial was held December 4, 2013 at Greenacres.

In lieu of flowers memorials may be made to Trinity Lutheran Church, the ALS Evergreen Chapter in memory of Kenny, or the charity of your choice.