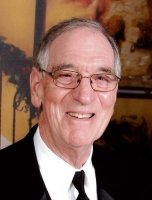 William (Bill) Barber passed away May 7th at St Joseph Hospital from unknown causes. We will all surely miss his sense of humor and friendly manner.

He was born July 28th 1932 to John and Pearl Barber in Bellingham, where he resided all his life. He graduated from BHS in 1950 and enlisted in the Navy in 1952 at the end of the Korean War. He served aboard the USS Edmonds for 4years stationed in Seattle, Pearl Harbor and Guam. He had many jobs in his lifetime; reef net fishing during his high school summers, driving 18-wheelers to California, dump trucks during the building of the refinery, auto parts delivery business, welded crab pots, and started a diesel oil business while attending Western.

He earned a BA in education and found his calling teaching Middle School at Whatcom and Fairhaven for 27 years. He had a 4-plex at the college and then owned a mobil home park until he was 75. He married Carol Van Brocklin in 1958 and they would have celebrated their 55th Anniversary in August. Carol and Bill owned Topline Travel for 5 years after retiring from teaching in 1993.

Bill enjoyed going to Longacres and gambling trips to Reno and Las Vegas. They traveled all over the world on cruises and tours and went to Arizona every March for Mariner’s Spring Training. He was a big Mariner and Seahawks fan.

He was preceded in death by his brother John and daughter Traci. He is survived by his wife Carol, son Brad, grand-daughter Nicole and sister Dolores Hansen of Arlington.

A graveside service will be held on Tuesday May 14th at 2:30 at Greenacres Cemetery. A Celebration of Life for Bill will be Sunday Jun 2nd at 2pm at Northwood Hall, 3240 Northwest Ave, Bellingham, behind Albertsons. Donations Information

Memorials may be made to the Whatcom Humane Society Building Fund in his memory. The address is 3710 Williamson Way Bellingham 98225.You can share memories of Bill at www.farewelltributes.com