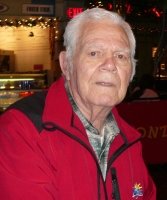 Waverly E. Parker, quietly passed on in peace Tuesday, May 28th in Bellingham. Waverly was a resident of Whatcom County for many years, living in Fairhaven in the winter and running the Parker Newman Grove Cabins in Birch Bay during the summer. Waverly joined the Navy at 17, first serving on the USS Tarbel running convoys to Europe in 1939 & 40, and participated in the rescue of crewman whose ships were sunk by German U-boats off the East Coast of the US. He stayed with the Navy becoming Chief Petty Officer (Torpedoman’s Mate) on the USS Hunley serving from its commissioning until his retirement in 1963. Following his Navy career, Waverly worked for the County of San Diego.

In addition to his work careers, Waverly was a proud Mason for over 63 years as well as being active in the Al Bahr Shriners in San Diego where he was a member of the Temple Guard.

The family requests that memorials be made to Whatcom Hospice.

A graveside service will be held on Tuesday, June 4 at 2:30PM at Greenacres Memorial Park, Ferndale, WA., followed by a reception at his daughters home. Donations Information

The family requests that memorials be made to Whatcom Hospice. 2800 Douglas Avenue, Bellingham, WA 98225