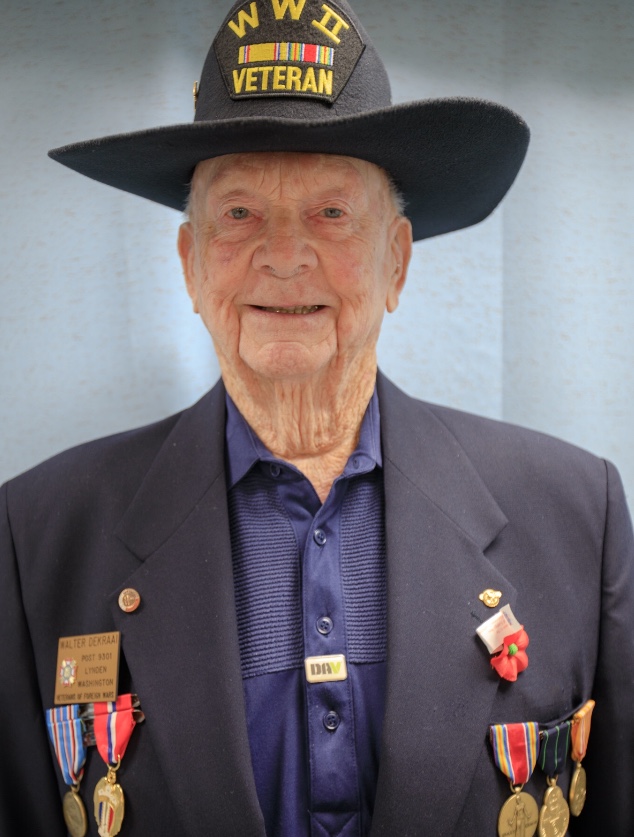 Walter (Walt) DeKraai, who lived in Lynden, WA, went to be with his Heavenly Father on April 6, 2022.  Walt recently celebrated his 100th birthday on February 15th with distinction as the oldest living Navy Seabee. Walt was born February 15, 1922 to Charles and Eurith of Ottumwa, Iowa. Walt was the oldest of seven siblings who grew up during the Great Depression.

On March 2, 1941, Walt married his sweetheart, Jean, in Ottumwa, Iowa. In 1942 Walt enlisted in the United States Navy wanting to do his part to support the war effort. He was a Shipfitter Second Class assigned to the Navy Seabees 83rd Battalion and was sent to various locations across the globe. After the Navy, Walt, Jean and their two children (Herb and Judy) moved to California. While in California, Walt and Jean welcomed their third child, Susan. Walt worked as a union pipefitter for the City of Los Angeles until his retirement in 1979. After retirement Walt and Jean continued to live in California until they relocated to Lynden, Washington.

Walt’s sense of country and patriotism compelled him to join Lynden VFW Local 9301. During his time with the VFW, Walt took part in many of the local Veteran and Memorial Day services with his fellow VFW patriots. Everyone in the community knew when Walt was out and about because of the flags flying from his vehicle. Walt took pride in knowing his community and spending time the local Police and Fire Department personnel. Walt would make his rounds to deliver donuts to them and those that work for Dave’s Sporting Goods and Ace Hardware.

On January 3, 2014, his loving wife of 73 years passed away. Walt is also predeceased by his son Herb and five brothers. Walt is survived by his brother, Bernard DeKraai, two daughters (Judy and Susan), four grandchildren (JC, Dennis, Brian, and Chris) and six great-grandchildren (Alex, Austin, Tori, Trevor, Kyla and Logan).

Military honors will be bestowed graveside at Moles Farewell Tributes Greenacres Memorial Park in Ferndale on Friday April 15, 2022 at 10:00 a.m. followed by a small reception on site. Seating at the gravesite memorial is limited to family members so please plan accordingly if wanting to attend.

Please share your thoughts and memories of Walt in his online guestbook.