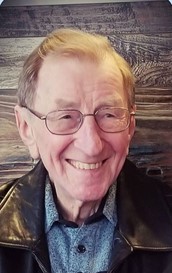 Bud was born in Quincy, MA on Thanksgiving Day in 1934 to Alice (Brown) and Walter Kamppila, Sr. Bud grew up in and around Quincy until his family moved to Sacramento, CA when he was 17, where he graduated from Sacramento High School in 1952. Bud was introduced to his future wife, Norma (McCurry), by his sister Pauline. They were married in September 1953. Together they raised four children in Rancho Cordova, CA.

Bud worked as an Estimator in the sheet metal industry, the majority of his career at Bos Sheet Metal in Sacramento, CA until his retirement in 1995. Bud and Norma moved to Lynden in 1996 to be near his sisters. After Norma passed away in 2007, he met and married Gert Huisman in 2009.

Bud was a lifelong Boston Red Sox fan, with Ted Williams being his favorite player of all time. He also enjoyed going to Birch Bay and taking long drives throughout the Pacific Northwest. But most of all he enjoyed spending time with his family.

Bud is preceded in death by his parents, wife Norma and brothers-in-law Don Seutz and Dick Johnson.

He died peacefully at home at the age of 86. Per his wishes, he was cremated and inurned at Greenacres Memorial Park in the Stillwaters Botanical Cremation Gardens. A Celebration of Life will be held later in the spring.

In lieu of flowers the family requests donations be made to the Lynden Senior Center.