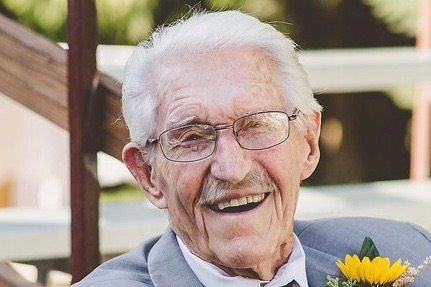 Ted Roland Genger Sr., a loving and devoted husband, father, grandfather, and friend passed away on October 17, 2019, at the age of 93. He spent the last days of his life surrounded by the love and comfort of his family in the warm and caring surroundings of the Hospice House.

Born in his parents’ Bellingham home on August 10, 1926, he was an only child who learned first-hand the value of hard work, a devout faith, and what it meant to be loved unconditionally. As a child of the Depression, Ted was constantly helping his parents, who owned the Stop & Shop Restaurant downtown, and then later the Genger Farm Supply Store. He attended Bellingham High School where he met his lifelong sweetheart, Fay Hite Genger.

After high school, Ted proudly served in the U.S. Army Air Corp during WWII as an aircraft mechanic. On March 25, 1947, he married Alberta Fay Hite. Their marriage was full of love, laughter, travel, and a demonstrated commitment to community and service. With care and devotion, they built a beautiful marriage together that serves as a profound example to this day.

Following WWII, he ventured into the contracting business with his father as Genger & Son Construction. His family often hears, “Ted built my house…”. Eventually, he retired from his passion for building homes to pursue even greater pleasures with family and friends. Ted and Fay spent 65 joyful years together, many of those square dancing, boating, motor-homing, wintering in Palm Desert, and watching sunsets at their summer home on Lake Whatcom – a sanctuary imbued with more than 60 years of memories and family traditions.

While Ted enjoyed memberships in Rotary and the Bellingham Yacht, Golf, and Motorhome Clubs, his dedication to the Lord was lifelong. As a congregant for more than eight decades at Birchwood Presbyterian Church, of which his parents were founding members, he served as an Elder, sang in the choir from boyhood on through his entire life, shared in his very special Bible Study group, and played an integral part in the planning and building of its new church building. “Papa Ted”, as he was known not only to his family, but to all who knew him, served as a true example throughout his life of acceptance, graciousness, and generosity. He impacted so many, and so many, of all ages, call him a friend. His family was of utmost importance to him and he loved his children, grandchildren, and great grandchildren beyond measure. This we will always know.

A Celebration of Life will be held at 2:00 pm on Tuesday, October 29th at his lifelong church, Cordata Presbyterian, formerly known as Birchwood (400 Meadowbrook Ct., Bellingham, WA).

Memorial contributions may be made to Cordata Presbyterian Church Memorial Fund or Whatcom Hospice Services.