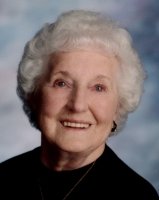 Sybil M. Denson (Orr) passed away on Thursday March 28, 2013 after 95 plus years of a wonderful life. She was born in Nooksack, WA, to Walter and Lilly (Leibrant) Orr. She grew up in the Nooksack area and graduated from Sumas Nooksack Union High School in June of 1937. At the age of 19, she eloped to Seattle, WA with the love of her life, Ivan R. Denson and was married on December 2, 1937. They were married for nearly 50 years when Ivan passed away in 1986.

Her hobbies over the years included country square dancing and many years of pheasant hunting in Eastern Washington with Ivan and the Hayumichalummi hunting bunch. She loved to bowl, and she bowled on two leagues until she was 90, going to a number of State and National Tournaments. She played golf with her sister Peggy, her son, and her daughters. In her later years, she enjoyed watching ice skating and Dancing With The Stars. She lived in the family home in Bellingham for 67 years and the last TV show she watched was Dancing With The Stars. Sybil belonged to the Bellingham Emblem Club, The Moose Lodge, and was an avid Red Hat Lady! Many of these things she loved doing with her daughters and daughter-in-law.

She loved the spring time with the flowers blooming, working in her flower gardens and her yard. She was loved and will be missed by all that touched her life. We will miss you most of all Mom!

You may share your thoughts and memories of Sybil at www.farewelltributes.com

A funeral service will be held on Thursday April 4th at 2:00 PM at Greenacres Memorial Park in Ferndale, WA.