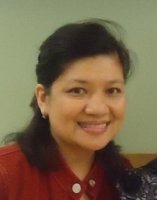 She was born to the late Denzel M. Habana and Zenaida C. Del Val, October 9, 1965, in Pasay City, Philippines. Sheila graduated from Juan Sumulong Memorial Jr. College in 1982, and received a bachelors degree in Banking and Finance from St. Paul College in 1986. She married a United Methodist minister, the Reverend Conrado M. Gonzaga, in 1994.

Sheila worked as a senior cash clerk at Rizal Provincial Capitol in Pasig City from 1986-1988. She was also employed as the bookkeeper of her home church, Taytay United Methodist Church, from 1988-1991. Then she moved to Cainta Rural Bank as a banker from 1992 to 1996.

Lord, in your mercy… hear our prayers.

In lieu of flowers, the family is requesting that donations be made out to Lynden United Methodist Church for Sheila H. Gonzaga Mission Foundation.