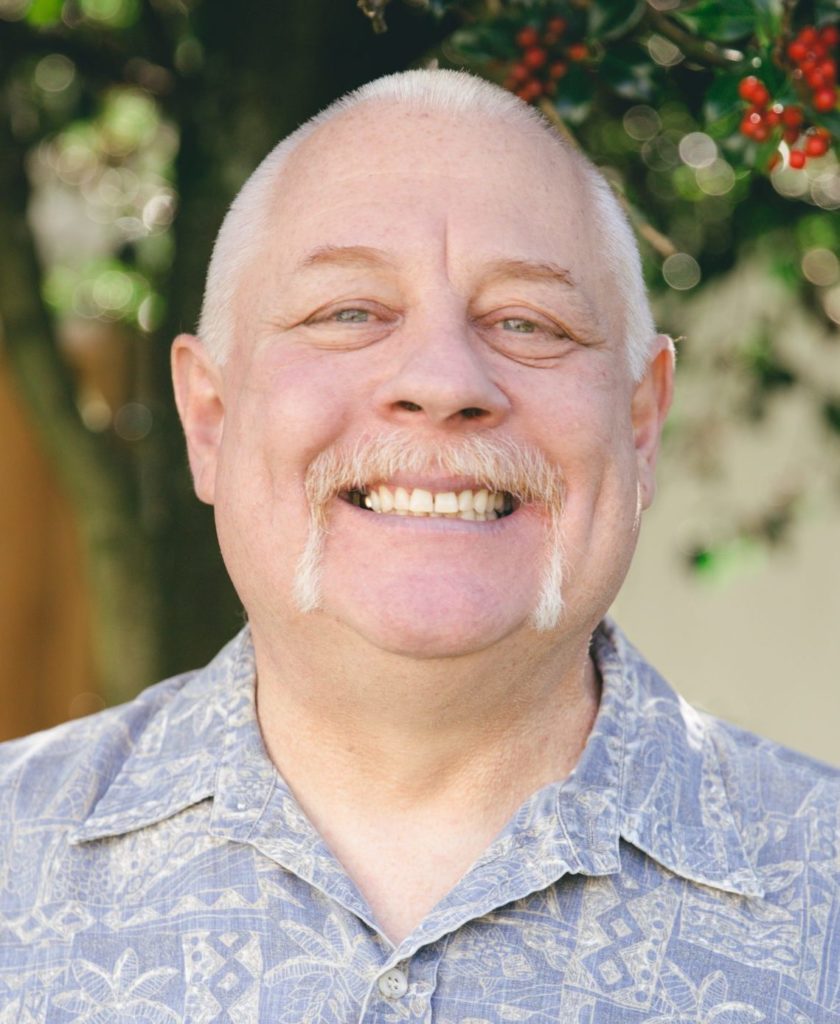 The citizens of Heaven were greatly privileged on March 15, 2022, to welcome home Scott Alan Miller with open arms – another gallant Christian soldier whose sword is finally laid to rest. He is survived by Crystal Gentry (daughter), Katie Goertzen (daughter), Jodi Miller (daughter), and Sue Miller (Schlipf) (sister). He is pre-deceased by Beverly A. Miller (mother) and James I. Miller (father).

James and Beverly were blessed to adopt Scott, born September 4, 1963, into their family. Growing up in Federal Way, Scott was always buzzing with energy. He spent a lot of time outside and tinkering on cars. After he moved to Redondo Beach, he found a certain little path which led to a spot where he would go for quiet time, to reflect and to write poetry. His youthful energy carried right on through into adulthood! Not only did his physical vitality serve him well in the career of tree service, but to any and all he would meet, Scott’s excitable nature was a refreshing reminder of life’s joy. He loved music and was part of a band where he sang and played bass guitar. Scott could be quite the social butterfly, bringing fun, positive energy to many people, but that natural exuberance of his shone most brightly with his children. His three daughters, Crystal, Katie, and Jodi, fondly remember the “tickle monster”, and also their wonderful camping trips with him in early years. Scott’s engaging stories, deep conversations, and sage advice are treasures which live on, much appreciated by his kin.

Scott was no slouch in the kitchen, taking pride in everything he prepared and shared. You could taste the love in every bite! Family and friends alike will never forget the heartwarming breakfast meals, (his signature banana muffins,) his famous bleu cheese dip, or his perfected recipe for the Reuben sandwich. Making muffins for his precious grandchildren was also one of his favorite things to do.

Something special about Scott was that you could feel his love, even if you were a stranger to him. As he said himself in one of his poems, “It’s as simple as a smile, that some don’t see, like holding the door, as they walk out after me.” It didn’t matter who you were, if Scott could brighten your day, he would feel accomplished. Carving walking sticks was another of his trademarks, and he might have made one for you, even if you didn’t know him that well! Through acts of kindness like these, we saw Scott’s sensitivity and tenderness, as well as his faith expressed. Scott’s love for the Lord was something he shared openly and honestly, both in word and deed – the kind of person who treated you like a friend. His big heart was unmistakable.

You wrote about Heaven in your poems, but now you experience for yourself what it is like, “where rainbows are forever, and you never feel cold.”

A memorial service will be held on Thursday March 24th at 1:00 p.m. at Greenacres Chapel, followed by a 2:00 p.m. graveside committal at Greenacres Memorial Park – 5700 Northwest Dr. Ferndale, WA.

Please share your memories of Scott in his online guestbook.