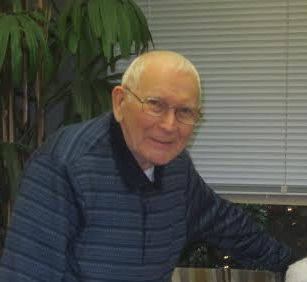 Rolf William Valum, age 87, passed away November 10, 2016 in Bellingham, WA. Rolf was born December 16, 1928 to Oddleiv and Ragna (Eggen) Valum. His parents immigrated with Rolf’s brother, Oddmund, in 1924 from Skogn, Norway to Seattle where Rolf was born. In 1932 the family moved to Whatcom County to a parcel of land in the Rome Grange district which remains in the family and has been home to four generations.
Rolf graduated from Mount Baker High School. He attended Pacific Lutheran College, the University of WA, and Western WA University where he earned several degrees, including a master’s degree in mathematics. With degrees in hand, he was ready for teaching as his career. His first teaching position was at Battle Ground, WA where he met Darlene Hunskaar, also a teacher, whom he married before being called into active duty in the Army. The couple spent two years stationed first in San Louis Obispo, California and then at Fort Lewis, WA. After returning to Bellingham, Rolf taught mathematics at Whatcom and Shuksan Junior High Schools; and at Bellingham and Sehome High Schools. He then served as vice-principal at Bellingham and Sehome High Schools. Rolf retired in 1981 and had an active, leadership role in the Retired Teachers Association.
Rolf’s interests included deer hunting in eastern WA with family and friends; skiing at Mt. Baker where he was a member of ski patrol for many years; boating, especially in the “Summer School” to the San Juan Islands, Desolation Sound and, on two occasions, to Southeast Alaska. Perfection was a priority, and he was a master at navigation and anchoring, even in the most challenging of circumstances. He was an active member of the Squalicum Yacht Club, serving in numerous leadership roles.
After 40 years of travel by sea, Rolf’s next era of adventuring was by land, in a motorhome named “Buster”. Travelling with Darlene and their cat, Pip, Rolf enjoyed visiting friends, relatives, National Parks, the Oregon Coast, the Southwest and, on one trip, the circumference of the U.S. Perhaps the greatest travel highlights of his life were four visits to Norway to meet his numerous relatives. Rolf thoroughly enjoyed his travel adventures. He also deeply enjoyed many visits made by his Norwegian relatives, relishing the opportunity to host and help build connections with their American relatives.
Photography was an important part of Rolf’s life and much effort was given to getting just the right shot. He was particularly known for his stunning botanical photography which is documented in the well-known book “Wild Flowers 2 SAGEBRUSH COUNTRY” published in 1974.
Rolf deeply loved the family property and being in out in the woods where he enjoyed nothing better than the challenge of felling a large tree for firewood. He contrived many devices to ensure the safe landing of huge trees, often involving his retired teacher buddies, but he most enjoyed the challenge when accompanied by his son and grandson who spent countless hours with him in the woods.
Rolf and Darlene took their children on many adventures and instilled a great love of the outdoors in all of them.
Rolf was preceded in death by his parents, his brother Oddmund and grandson, Brian Baker. Rolf is survived by his wife, Darlene, daughter Janell (Chet) Baker of Coupeville, WA., sons Lane (Julie) of Salt Lake City, Utah, Thor Valum of Bellingham and Kjell (Manca) Valum of Bellingham; grandchildren, Andrew Baker, Mackenzie Valum, Finn Valum, Bryce (Tresa) Valum, Derek Valum (Melissa Farlow) and Isaac Gray; as well as numerous nieces, nephews and cousins.
Memorial Service on November 18 at 2:00 at Immanuel Lutheran Church, 5782 Lawrence Rd, Everson. In lieu of flowers: Bellingham Food Bank or Whatcom Hospice.