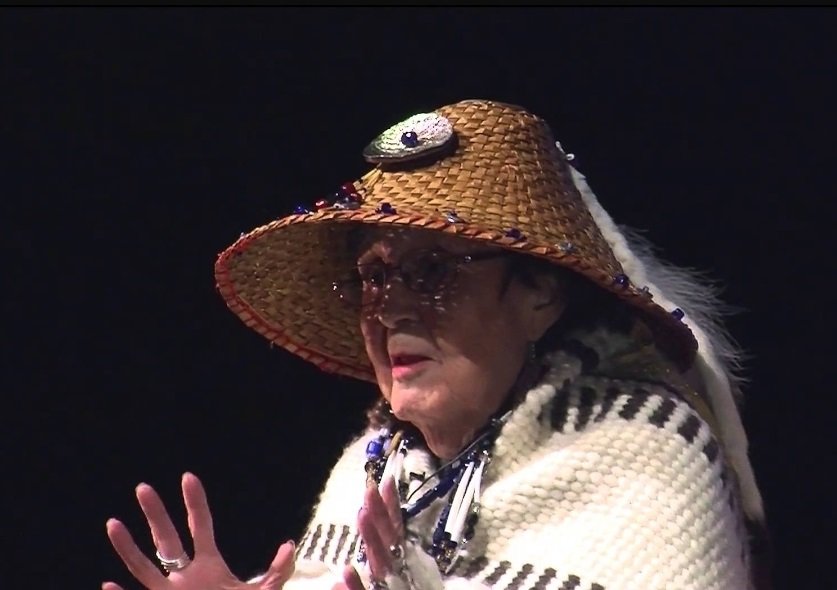 Others might view Ramona’s upbringing as ‘humble’;it was her Sche’lang’en, her way of life. She grew up on the Lummi Reservation, next to the Nooksack River. Ramona has been a fisherman since she was 12 years old. She was taught to: hunt bear, deer, duck and geese; fish in the River; and gather. She learned how to peel bark and how to skin beaver, muskrat, and mink.

Ramona served on the Lummi Indian Business Council from 1972-78, it became her lifelong commitment to working with tribal issues and fighting for inherent rights.

In addition to serving on Lummi Tribal Council, Ramona was elected and appointed to serve in various positions at the tribal and federal level. At the Lummi Nation she: served as the Lummi Health Clinic Director; the Chairman of the Law and Order Committee; assisted in developing Lummi Aquaculture; Lummi Task Force against taxation; appointed as Chairperson of Governor Evans’ Indian Advisory Committee. Ramona gathered witnesses to testify in the Boldt case, she lobbied and garnered federal support from Congressman, she worked with attorneys. In fact, she was once ‘accused’ of being an attorney during a high-powered meeting on water rights. One of the Bureau attorney’s commented about her in-depth knowledge and deep legal insight and asked her where she attended law school and she replied, “I’m not one of you!”

Ramona has always encouraged that tribes work together on common uses. She was taught that it’s easier to break one stick than it is a bundle. Over the years she worked with other tribal leaders throughout the Northwest, such as: Tandy Wilbur, Sr. of Swinomish, Bob Jim of Yakama, Alex Sherwood of Spokane, Ozzie George of Coeur d’Alene, Lucy Covington and Mel Tonasket of Colville, and Joe Della Cruz of Quinault.

Ramona was the tribal historian in the play, “What About Those Promises”. In the play Ramona shares her views, her experiences, her vision of what happened during that time in history stating, “…the federal government does not make treaties with municipalities, they make treaties with nations. We are Nation’s. Each of us in our tribes have experienced the stealing and taking of our property without giving us consideration of our Sche’lang’en, our way of life.”

As a leader she was driven by her commitment to the children and our community; she wanted everyone to receive services without limitations.

Ramona achieved many accomplishments and successes in life, she began her journey to join her loved ones, by doing it her way.