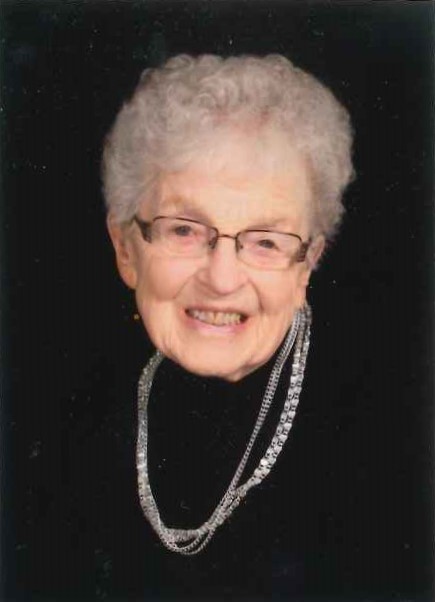 She was born on May 28, 1921 in Williams Lake, British Columbia to Patrick and Margaret Sharkey. She is preceded in death by her two sisters and their husbands: Alfreda and Riney Schriock and Catherine and Claude Tremelling.

Her family moved to Ferndale, Washington in 1924. Her father passed away when she was six and her mother and sisters worked on their farm where St. Joseph’s church is now located.

She was a member of St. Joseph’s Catholic Church, St. Mary’s Guild, Catholic Daughters of America, and Women of the Moose. She enjoyed the card parties and dances in her early years. Graduated from Ferndale High School in 1939. Her first job was with Brown and Cole putting grocery orders together for customers. She also worked for Haggen’s (White House Market) before she married.

Pat grew up knowing Frank Xavier Imhof and their first date was to the Schwingfest in Tacoma. They married on November 10, 1945 and moved to their dairy farm on Slater Road, where they farmed together for 30 years. Pat and Frank had eight children who are all still living: Carolyn (Steve) Fay, Frank (Patti) Imhof, Bob Imhof (Bernie Maier) , Marilyn (Dave) Rasmussen, Jim Imhof, Joe Imhof, Ed Imhof (Cheryl Wilcox), and Darlene (Gary) Patterson. She is also survived by 19 grandkids and 24 great grandkids.

Pat and Frank enjoyed traveling. They attended many Soil Conservation Conventions around the United States.  The took several cruises and visited New Zealand where Frank was born.  Pat joined her sister Kitty and several of their children for a month long trip to Ireland, England and Wales.  She always had a great time.

Pat enjoyed bowling and participated in three bowling leagues over 56 years, stopping play at the age of 97. She loved playing cards – Meldrum or Pinochle – with anyone who would stop in. She said if she owed you money, you would never be broke. In her later years Pat was an avid fan of the Seahawks and Mariners. She watched Jeopardy and the Wheel of Fortune every night and loved to grow flowers. We remember her for her patience, quick smile, home cooked meals and homemade pies. She loved her family well and was well loved in return.

The family is celebrating her life at a private family gathering. In lieu of flowers, memorials may be sent to Whatcom Hospice or St. Joseph Catholic Church in Ferndale.