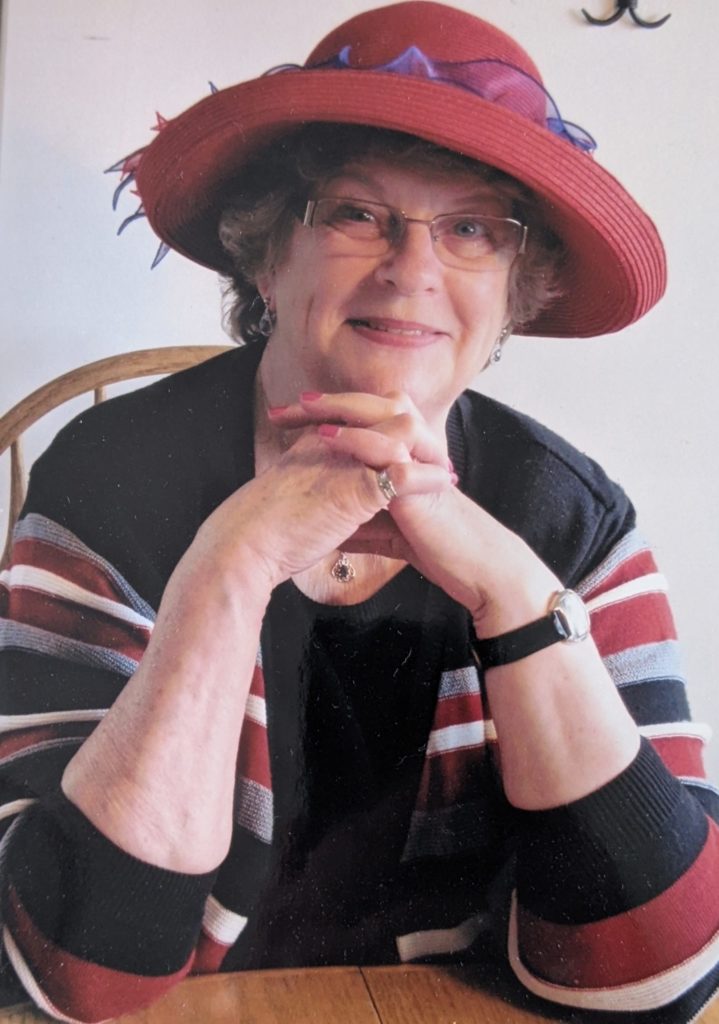 NORMA JANE ADAMS went into the Arms of God Tuesday, July 26, 2022, surrounded by loving family at Hospice House in Bellingham, Washington. Her Celebration of Life is Friday, August 12th,1:00PM in the chapel at Greenacres Memorial Park, 5700 Northwest Drive, Ferndale, WA. Indoor masking is requested by the family. Norma’s inurnment will follow at Greenacres with a reception at the family home.
Norma Jane was born in Erskine, Polk County, Minnesota on March 28, 1940, to parents George and Doris Norling. She was named after her aunt Norma Jane Larson, and her family nickname was Janie. Ancestors immigrated to Minnesota from Sweden, Denmark and Norway starting in the mid-19th century. Norma was proud of her Scandinavian heritage. “Uffda! Ya sure, you betcha!”
The Norlings migrated to Washington in search of work when Norma was four years old. They settled in Burien, Washington, with their eldest daughter Barbara (Barron) and Norma (Covert, then Adams). Sons Ken and Dean Norling were born years later. Norma was preceded in death by her parents, her brother Ken, her first husband Keith, and her beloved second husband R. Keith Adams, with whom she will be buried.
In May 1956, Norma married Keith Wayne Covert. They shared five children together: Debi, Denise, Wayne, John and Darren. The family lived in the Seattle area until 1969, when they moved to Rockport in the Upper Skagit Valley in Washington. Years after divorcing Keith, she married R. Keith Adams in October 1983. They resided in Sedro Woolley and built many memories together until his death in 2002. As the Matriarch, Norma presided over many fun family events including the annual Covert Clan Christmas. Celebrating her milestone birthdays, Mexican food was always the request, often accompanied by breaking piñatas. Many enjoyable summers were spent camping at “The Back Achers,” the Adams’ vacation property. She also enjoyed time with the Adams family at reunions and weekly potlucks. Norma’s descendants have grown into a tight knit clan which includes co-matriarch and sister-in-law Annette (Covert) Tupper and her family; Debi and husband Chris Covert-Bowlds, son Steven Covert-Bowlds and daughter Sarah Jane Covert-Bowlds; Denise (Covert) Davis, son Danny and wife Missy Hendrickson and their children Cody, Kiersten and Mazie Hendrickson, daughter Tiffany Conley-Hoyle and husband Jeremy Hoyle and their children Lucas Conley, Chloe, Jaelyn and Ava Hoyle, son Aaron and wife Erin Hendrickson and their son Barron, daughter Brandi Hendrickson and fiancé Aaron Bacon; Wayne Covert and his dear friend Erva Cress, daughter Crystal (Covert) and husband Adam Smith and her children Brayden Fay and Jaxsen Raasch; John and his wife Rhonda Covert and their sons Jason and Taylor Covert; son Darren Covert; and Thai exchange student granddaughter “Ice” Waraporn Raksaphram.
There is a consensus among the grandchildren and great-grandchildren: Grandma aka GG (great grandma) was FUN and FUNNY! Brandi captures GG’s spirit. “Her infectious laugh and smile and the way she can keep a serious face for a second when saying something hilarious. The way she would always eat dessert before dinner so she could make sure she wasn’t too full for dessert after dinner always made me smile.”
Norma was courageous and resilient, having survived a tumultuous first marriage. She was highly intelligent, and competitive in board and card games, and all but son John were intimidated to play her favorite game Scrabble with her. Norma loved camping and glamping, traveling, especially trips to the ocean, to Hawaii and cruising to Alaska. In her last year she lived with daughter Debi in Ferndale, and Debi hosted many family members who came to keep Norma company. Her favorite was playing Mexican Train, cribbage, kizmet, yahtzee, doodle dice, and Words With Friends (including chatting with Suzie from Melbourne, Australia) and other mobile games. She delighted in watching the hummingbirds at her feeder, collecting frog and gnome memorabilia, and decorating inside and outside for every season.
Norma was also known for her stylish dress. “Shop ‘til you drop” was her motto. Her shoes had to match her tops, and she swapped out coats and purses to suit her style of the day with an occasional hat. She enjoyed dressing up for her Red Hat Society outings and cherished her friendships with her Sedro Woolley club.
Growing up, Norma was super shy until her landlady and friend Polly Swayze took her under her wing and gave her a job as bartender at the Fish-In Cafe in Rockport. Later, Norma served as bartender at The Hub Tavern in Concrete and The Old Timers Inn, Sedro Woolley. Norma spent many years of her career in retail, mainly at Holland Drugstore and the Jackpot mini-mart in Sedro Woolley