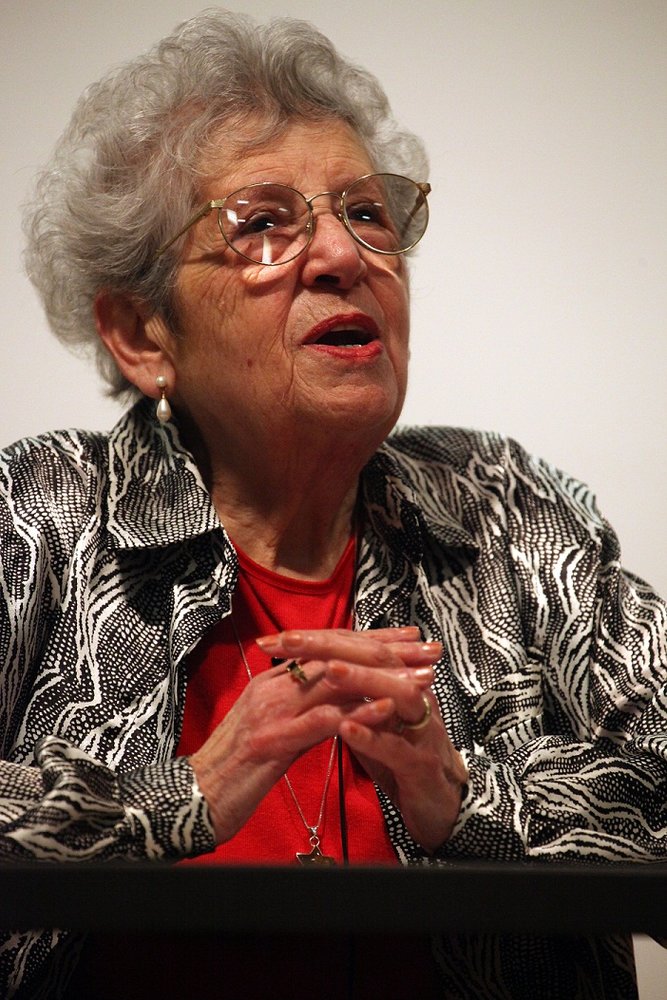 Noemi Ban passed away on Friday June 7th, 2019 in Bellingham after a brief illness, surrounded by her loving family and friends. She lived to the “honorable” (her word) age of 96 (and a half, as she would insist). Although it was her generous heart that gave out in the end, that heart touched our community and many other communities worldwide.

Noemi was born on September 29, 1922 in Szeged, Hungary to Samuel and Juliska Schonberger. Although she grew up in a cultured Jewish home, she and her family witnessed Hungary’s slide from democracy to Nazi dictatorship. As a result, Noemi’s mom, with unusual foresight, insisted that she learn a manual skill, as a seamstress, which could aid in her survival in an anti-semitic wartime environment. The path of her young life was completely disrupted by the Nazi invasion of Hungary. As she has related so eloquently to countless audiences, the Nazis deported her and her family to Auschwitz, where her mother, grandmother, younger sister and baby brother were murdered. Because of her unparalleled resilience, good health, manual skills and courage, she survived 3 months in Auschwitz as well as a subsequent transfer to Buchenwald labor camp, where she helped to sabotage the making of Nazi bombs.

Following the war, she reunited with her father back in Hungary and rekindled a pre-war relationship with Earnest Ban, whom she married in 1945. They had two sons and lived in Budapest where they had successful careers as teachers. During the Hungarian Revolution of 1956, she and her family, at her insistence, escaped from Hungary, fleeing Communism as well as the return of Fascism. They found their way to America and settled in St. Louis, Missouri.

After learning English, Noemi embarked on a second award winning teaching career lasting 23 years. In 1982, she and Earnest retired to Bellingham to be close to her son, Steve’s growing family. After several years of traveling, Earnest became ill. She was his primary caretaker until his death in 1994.

Shortly before Earnest’s passing, Noemi began a third chapter of teaching, volunteering her time and energy speaking and co-writing a book about her experiences in the Holocaust, with her message of survival, resilience, and love. Not only did Noemi’s speaking and writing provide an ongoing purpose to the last 25 years of her life , but it significantly impacted the life of every member of her audiences. Her wish was to continue speaking as long as she could and she did so until the very end of her life.

Noemi received many awards during her teaching and Holocaust education careers:
1980: Teacher of the Year in St. Louis, Missouri
1998: Golden Apple Award
1999: Honorary Doctorate, Gonzaga University
2003: Washington Education Association Human and Civil Rights Award in the category of International Peace and Understanding
2004: Excellence in Holocaust Education Award
2006: Northwest Women’s Hall of Fame
2010- Americanism Award from Daughter’s of the American Revolution (DAR) o 2012: One of Bellingham Herald’s “Ten Who Cared”
2013: Honorary Doctorate, Western Washington University
and finally…..
Volunteer of the Year Award from Assumption Catholic School, received at 12:30 PM on June 7, 2019, three hours before she passed away.

In lieu of flowers, memorials may be sent to the Ray Wolpow Institute for the Study of the Holocaust, Genocide, and Crimes Against Humanity or the New Synagogue Fund of Beth Israel Synagogue, Bellingham, WA.