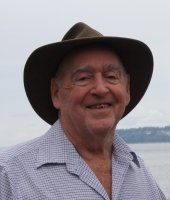 Monroe Tom Wissinger was born in Highland, Illinois to Thomas and Beulah Wissinger. After his service in the Navy from 1957 to 1961 he moved to Washington in 1975 where Tom worked for Boeing in Renton. Later he moved to Ferndale to work at Intalco where he retired in 2001.
Tom enjoyed woodworking, tinkering in his shop, gardening, and singing.
He is survived by his wife Mela, sons Tom (Sheryl) Wissinger of Missouri and Wessley (Dina) Wissinger of Salinas, CA, daughter Teri Wissinger of Seattle, step-children Cheryl (Peter) Boston of London, England, and Craig (Shirlleisa) Caswell of DuPont, WA, step-granddaughter Krystal Brown of Tampa, FL and one grandchild along with many nephews, nieces, relatives, and friends.

Visitation will be held on Saturday, September 27th from 1:00PM to 4:00PM in the chapel at Moles Farewell Tributes – Greenacres, 5700 Northwest Dr, Ferndale.

A funeral service and reception will take place on Monday, September 29th at 1:00PM, also at Moles Farewell Tributes Greenacres