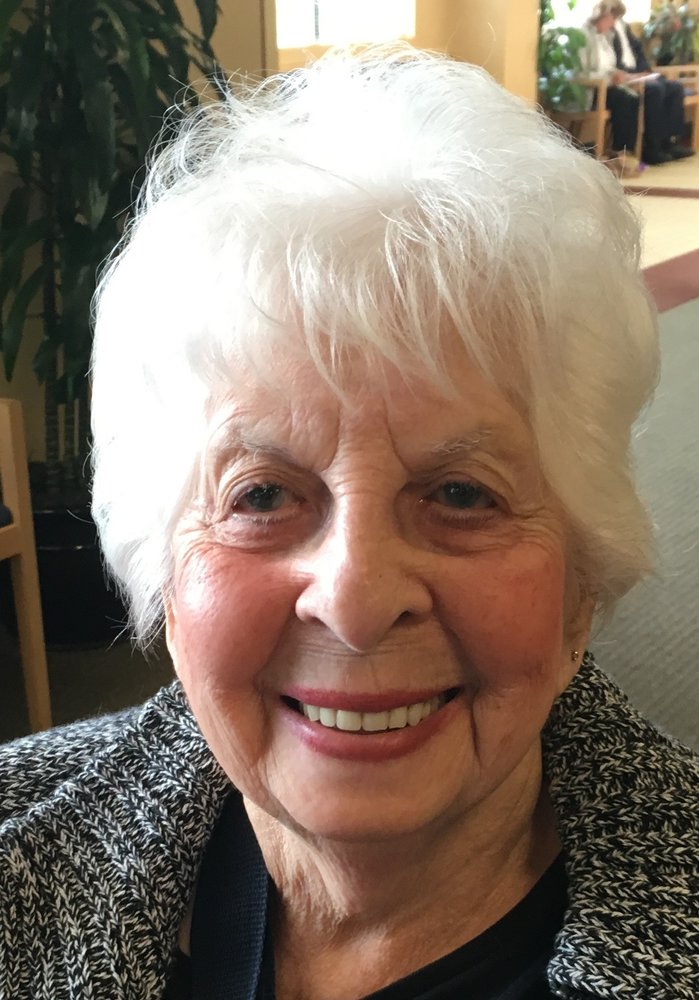 Maxine Frances (Chaney) Grant passed away peacefully with family by her side on August 29, 2017 in Beaverton, Oregon. She was 92. Her life was marked by her adventurous spirit, her enduring love for her family, and her poetic wit.

Maxine was born in Giltner, Nebraska on April 19, 1925 to Byron and Frances Chaney. She lived there through the Great Depression, later moving to Pocatello, ID with her family – the first of 26 moves in her lifetime. At 17, Maxine set out on her own for Portland, OR where she lived in the Joan of Arc Hotel for Women, worked for the Pacific Telephone and Telegraph Company, and danced in the ballroom of the Oddfellows Hall. After several years, she returned to Pocatello, where she would meet the man who would become her husband of 55 years at Eddy’s Bakery. While Maxine worked on the books in the back, Orvin (John) Grant would walk by her desk singing the tune “A Pretty Girl is Like a Melody.”

John and Maxine married in 1948 and moved around, living in LaGrande and Coos Bay, OR, and LaConner and Birch Bay, WA. They stayed the longest in Bellingham, WA, where Maxine lived for 45 years. She was a fixture at The Firs Bookstore in Bellingham, where she was a bookkeeper for many years, and also at Geneva Community Church where she was Sunday School Superintendent for scores of 4th and 5th grade children for 18 years.

After she was widowed in 2002, Maxine moved to Beaverton, OR to live with her daughter. She remained in Beaverton and lived at Hearthstone at Murrayhill Retirement Community where she had many friends and was loved by residents and staff alike. Maxine was good-humored and a great listener, loved hymns and books, and became known for conversing with Hearthstone’s maintenance staff through limericks left in her apartment.

In all her roles, and throughout all her moves, Maxine excelled in her capacity as a mother and grandmother. In addition to caring for her own children and in-laws (Steve & Kathy Grant, Scott & Linda Grant, Greg & Elizabeth Grant, Janelle Grant Freitag & Tom Freitag, and Julie Grant Block & Adrian Block), she looked after others in her community as if they were her own. As a grandmother to 14 and great-grandmother to 17, she had a knack for making each of them feel special. She passed along many pieces of wisdom, primarily through pie recipes, clippings from the large-print Reader’s Digest, and hand-written poems on birthday cards.

Maxine is preceded in death by her parents, husband and siblings (Eugene, Kenneth, James, and Harold Chaney) and survived by her sister Virginia Chaney Chatterton of Pocatello, Idaho.

A memorial service will be held at Hearthstone at Murrayhill Retirement Community on Sunday, September 10 at 10am. The family plans to gather in Bellingham in the spring for a graveside service and to honor Grandma Max through a family reunion. Memorials can be directed to the Camp Firwood “Campership” Fund c/o The Firs Camps and Retreats at 4605 Cable Street, Bellingham, WA 98229.

The family would like to thank the staff of Hearthstone at Murrayhill for years of loving care – especially during the last few days. The Signature Hospice team was also wonderful with special thanks to Sunshine, Laura, Joan, Tori just to name a few.