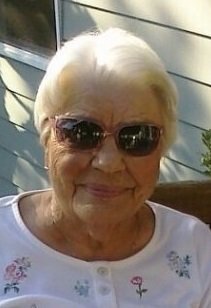 Mary Margaret “Peggy” Gundel was born June 28, 1922 to Howard and Mary Booth in Lyons, Colorado. The family was one of very modest means which would influence Peggy for the remainder of her life. Peggy was a dreamer who preferred the fantasy of her paper dolls to that of her studies. She grew up with her parents and older brother, Max, at the Lyons power plant where her father was the operator. Peggy played basketball on her high school team prior to moving to Longmont, Colorado to live with her grandmother, where she attended and graduated from Longmont High School. In her junior year, she met Kenny Gundel in study hall and, as they say, her life was never the same. They fell in love and were seldom parted for the next 80 years.
After Kenny and Peggy married, they moved to Portland, Oregon with their first daughter, Carole. The war was in full swing and soon Kenny found himself in the South Pacific theater and later in occupied Japan. He didn’t see his family for four years. During the war, Peggy and Carole lived in Portland in a large house with her mother-in-law and father-in-law, along with her three sisters-in-law and assorted female friends. Peggy worked in clerical positions during the war years. After Ken returned and found a job, they moved to Salem, Oregon along with their newborn son Greg.
Peggy was the picture-perfect example of a homemaker and a great mother. She was a fine cook, kept an immaculate home, and always had clean children. She loved playing cards and bridge was her specialty – she was very good! After the family moved to Eugene, Oregon their youngest daughter Mary was born. Additional moves were made to Seattle and Bellingham. The move to Bellingham was prompted by the purchase of Bellingham Supply Co. In 1979 they sold the company and retired to their home on Samish Island, then to the Skagit Country Club. They were snowbirds for decades and had homes in Mesa, Arizona and Sun Lakes, Arizona. The next move was to Lynden. Peggy moved upwards of 20 times in her life, travelled the world, and had dozens of close friends. She was married for 78 years to the love of her life, and she was loved by her family.
Peggy is survived by her husband Ken, children Carole (Jim Chapman), Greg (Kathy), and Mary. She is also survived by her sister Nancy, eight grandchildren, five great grandchildren, and one great-great grandchild.
A small family service will be held at noon on Friday in Lynden.