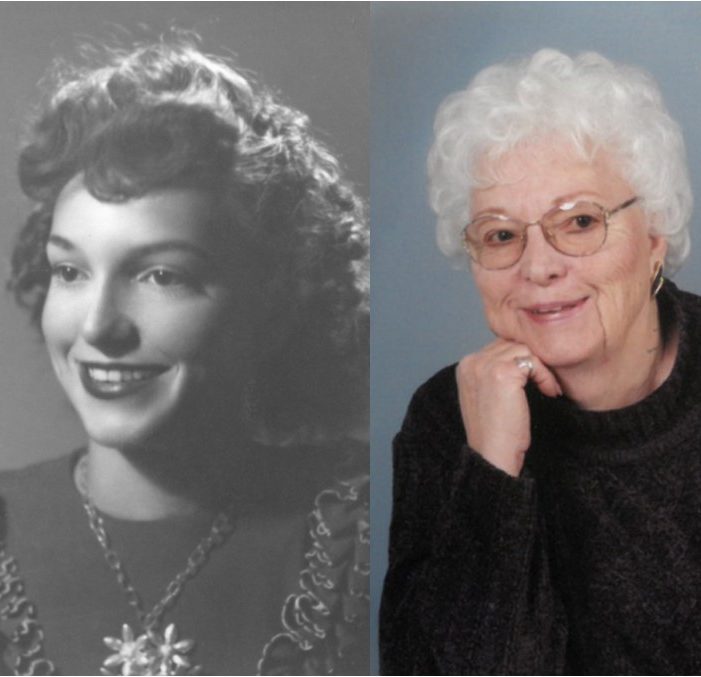 Mary seldom complained and never said an unkind word about anyone. And while she may have called you by a different name, she always knew who you were. Mary Dyrland passed away at the age of 92 in Bellingham on the 11th of September, 2019.
Until recently Mary lived independently at home with the loving support of her family, David (Renee) Dyrland, Jack (Brenda) Dyrland, Joyce (Dave) Bouma and Erik (Jennifer) Dyrland. She lost her husband Ervin in 1990; they had been married 44 years.
Mary never tired of sharing stories of the earlier years. In the fall of 1945 the honk of a car horn turned her head while she and a friend were in downtown Bellingham. They never made it to the movies as planned. A young Ervin Dyrland, on leave from the navy, convinced the girls to go dancing with him and his friend instead. Ervin, never the romantic, proposed the next year while driving down Holly Street- the ring was in the glove box- and he simply said, “Well. Do you want it?” Together, Ervin and Mary enjoyed boating, camping, dancing and going to the movies. They raised 4 children and Mary was immensely proud of them. She was always there to listen and not criticize, attended every sporting event, and kept detailed scrapbooks with newspaper clippings and statistics.
Following Ervin’s death, Mary was always quick to accept opportunities to watch (often yelling and cheering from the cold sidelines) any of her 8 grandchildren (Apryl Breitbach, Sara McClellan, Michael Dyrland, Jacob Dyrland, Josh Bouma, Cory Bouma, Mary C. Dyrland and Nicholas Dyrland). She loved to visit with any of her 7 great grandkids. Mary always put a on a smile and cherished holidays with her family. Always offering to help, Mary opened her home to family, and never declined a dinner initiation or a piece of dessert. For many years, Mary enjoyed filling her time in her flower garden, reading, going to the YMCA to meet up with friends or watching sporting events in person or on TV. Perhaps the most memorable was attending her first Seattle Mariner’s game with a “no-hitter” while sitting next to her son Erik and her brother Emmet who she had not seen in 20 years. Mary snorkeled for the first time at the age of 80 in Hawaii.
We see that Mary did not lead an ordinary life- although she would argue with you about that. She grew up with a dirt floor in Oklahoma during the Great Depression and the Dust Bowl, lived her teen years in Watts, California and rode the bus to the beach with her sisters, and raised her family in Bellingham (with a dairy cow in the backyard and later Yeager the dog). Mary was like the beacon of a lighthouse: always there, constant and shining. Her memory will continue to light our lives.
The family would like to thank Whatcom Hospice and Mt. Baker Care Center for their great care and compassion. A private family memorial will be planned at a later date.