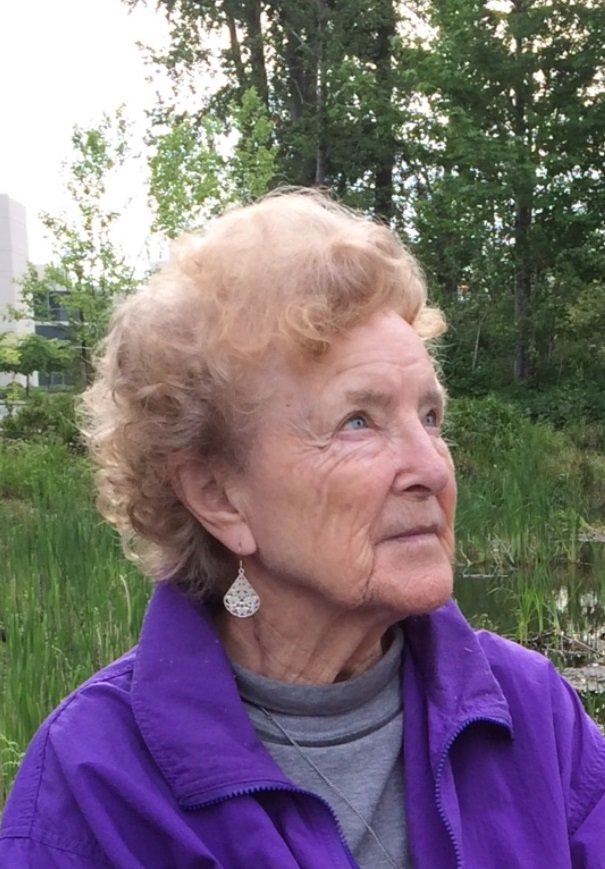 Mary was born in a small log cabin on June 14th, 1924, in Innisfail Alberta and is now in Heaven at age 92. Nicknamed “Babe” from birth, she was the youngest girl of 7 siblings. It was a tough life at an early age. Her mother was struck by lightning causing her to become deaf and to raise her seven children on her own. Her schooling began in a one room schoolhouse, which Mary and her brothers and sisters walked 3 miles to and from their home including crossing a river in a row boat. At age 16 Mary moved to Bellingham with her sister Vesta to work in their Aunt’s corner grocery store in the Geneva neighborhood. She graduated from Bellingham High in 1943. Later, while working at the Leopold Hotel as a waitress she met the love of her life, Jess Kenoyer, who was working there as a bellman. They were married in 1947 and had 3 rambunctious boys, Kenneth, Jeffrey and Chester. Together they began building a future constructing homes throughout Bellingham. Mary’s talents were unlimited, including owning a cake decorating business and later owning Kenoyer’s Art Gallery on Railroad Avenue in downtown Bellingham. Jess and Mary were founding members of Bellingham Christian School, Jess building the school on Sunset and Mary involved in activities and supporting the school until her last days. They were also involved in and were strong supporters of Young Life from its inception in Whatcom County. Mary was an encourager, touching so many lives with personal notes with scriptures to inspire without regard to their status in life. Mary is preceded in death by her husband Jess, 16 years ago, and is survived by her sister Vesta Blum and brother Melvin Rickard both of Bellingham, her sons, Ken and wife Debbie, Jeff and wife Lisa and Chet and wife Lynette. Mary was surrounded by and loved her 9 grandkids and 13 great grandkids. A celebration of Mary’s life will be held this Wednesday, July 20th at 11am at Christ the King Church, 4173 Meridian St., Bellingham with a lunch reception to follow. In lieu of flowers, donations may be made to Bellingham Christian School and Bellingham Young Life.