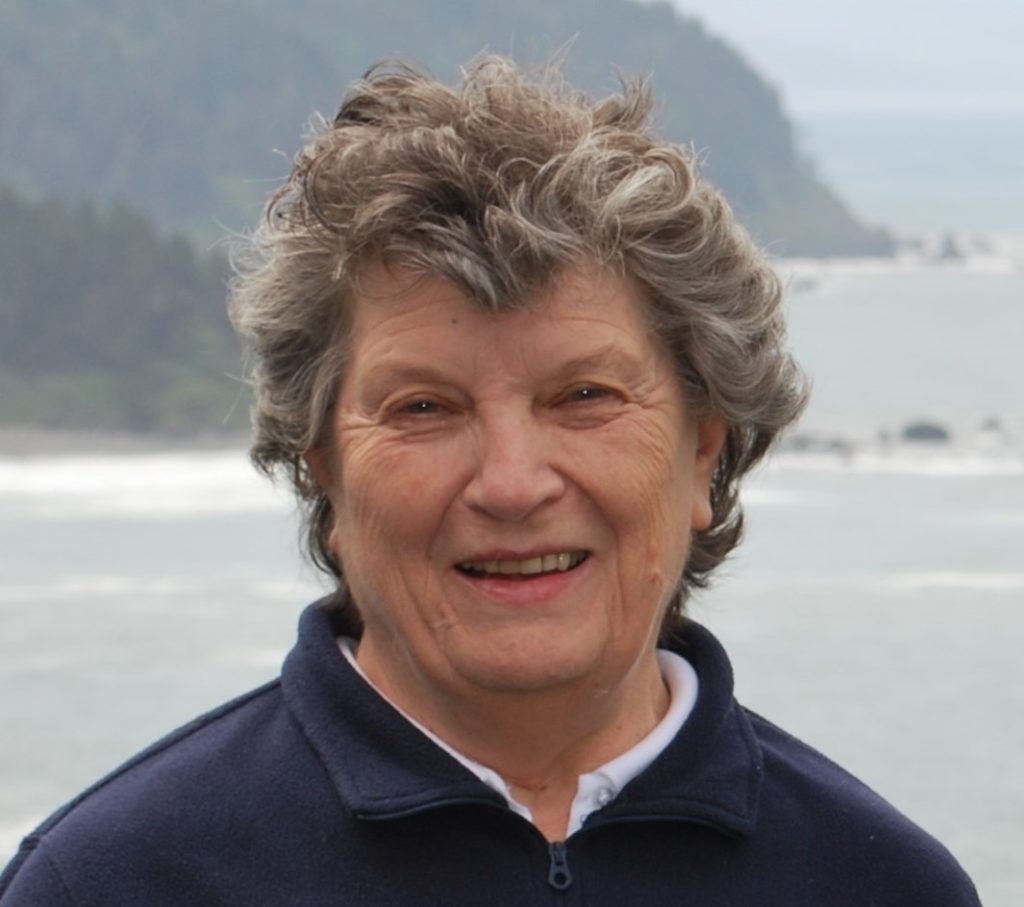 Marcelle Josephine Kubota passed away suddenly on June 10,2022 in Bellingham, WA from renal cancer at the age of 90. She was born February 20,1932 in Paris, France, the second of 4 children born to parents Alphonse and Elise Goutte.
As a child Marcelle lived in Paris in an apartment on the grounds of Hopital universitaire la Pitie-Salpetriere, a teaching hospital in the 13th arrondissement of Paris where her mother was a Head Nurse and her father a mailman in the Latin Quarter. At the age of 7 years old amid the outbreak of World War II Marcelle and her siblings went to live with their grandparents on their farm outside the town of Pau in the Pyrenees Mountains where it was safer. Life was difficult with food shortages and not being able to be with her parents. Marcelle with her siblings and cousins worked on the farm tending the animals and helping in the fields as well as attending school, which was truly a 3 mile walk away. After 4 years of missing her parents, Marcelle returned home to Paris before the war ended. She remembered the US service men liberating Paris and throwing them candy from the street. Once the war was over life became easier and more enjoyable sharing many dinners with extended family where together they would eat delicious food, tell stories and sing. Marcelle especially loved singing with her sister and listening to opera and continued singing her favorite songs in French throughout her life.
Marcelle always loved math and working with numbers which led her to study as a bookkeeper, but her dream was to work as an interpreter in a grand hotel in Paris. Because of this dream she went to England as a young woman and worked as a nanny for a wealthy family to improve her English while she treated them to her French cooking skills. Once she returned to Paris Marcelle worked in a shop near the Champs Elysees.
Then one special day she met a handsome American GI named George Kubota on a blind date under the Eiffel Tower. Shortly after meeting George returned to the US as his enlistment was up. They developed a relationship by mail exchanging many letters before George returned to Paris to propose and marry Marcelle on December 27, 1955. Leaving behind her family and her life in France the couple then moved to George’s hometown of Metaline Falls, WA where they worked in the Kubota family hardware store, The Metaline Falls Trading Co., and raised 4 children.
It was a very different life from the big city of Paris but Marcelle adapted well and enjoyed living in a small town. She made good friends and enjoyed taking long walks in such a beautiful place. She was often seen walking along the highway or around town and walked the Bloomsday race in Spokane several times. She and George would often golf at the local golf course in the summer and play badminton with a local group as well as go cross country skiing in the winter. In their later years they enjoyed trips to Reno and Las Vegas to gamble, often making it a family trip with their kids as well as a few trips back to France to visit family and familiar places. And they always enjoyed trips to visit the grandchildren.
Marcelle was an avid Gonzaga basketball fan and rarely missed watching their games on TV while wearing her Bulldogs team swag, and loudly letting the refs know what she thought of their calls. A knitter and crocheter, each of Marcelle’s children and grandchildren have an afghan made by her. Marcelle was an excellent cook and taught her children to make delicious French specialties such as cream puffs, French bread, aioli and her grandchildren’s favorite sable cookies. Through the years she enjoyed playing card games with friends and family and was always ready for a mean game of Yahtzee.
As Metaline Falls became her permanent home Marcelle became a US citizen and used the process of gaining citizenship as a learning opportunity for her Junior Girl Scout troop. She was sworn in while wearing her Girl Scout leader uniform with her troop in attendance.
After many years spent in Metaline Falls raising kids, working, chopping wood, huckleberry picking, and living a wonderful life with longtime friends and family Marcelle and George moved to Bellingham WA 3 years ago to be near their children as they aged. In their hearts Metaline Falls was always their home and where they yearned to be. Now they are returning together and will be memorialized at a celebration of their lives on Saturday, July 2,2022 at 1 p.m. in the Metaline Falls town park. All are welcome, please bring a lawn chair if you’d like to sit. You will be welcome to share a story or remembrance of Marcelle or George during the celebration.
Marcelle is survived by her 4 children, James Kubota (Linda), Christine Kubota (Michael Pietro), Marc Kubota (Sheri White), and Michele Kubota, granddaughters Jennifer Kubota, Elise and Tess Pietro, grandsons Grant and Chase Pietro, sisters in law Irene Neves and Jean Cassill, nieces and nephews,
Marcelle is preceded in death by her parents Alphonse and Elise Goutte, sister Francoise Lescroart, brothers Gerard Goutte and Laurent Goutte, grandson Dominic Pietro, nephew Marc Lescroart, and just 3 months ago her dear husband of 66 ½ years George Kubota, Jr. She has missed him greatly and “just wanted to be with Dad.” We believe they are now together again.
Being a mother Marcelle was always concerned about the wellbeing of children. Donations may be made in her honor to benefit children at The Artscape Program, c/o The Cutter Theatre, Box 133, Metaline Falls, WA 99153, or to the international adoption and child support agency with donations directed to the either the China Program or the Cambodia program at Holt International, P.O. Box 2880, Eugene OR 97402.