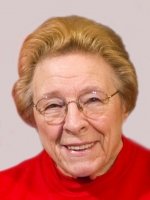 Louise Irene Shipley passed away on December 16, 2013 at the age of 88. She is survived by her sister Lillian, her four children: sons, Roger, Gary, and John, her daughter, Kathy, and six grandchildren. Born Louise Sutter in Akron Ohio where she spent most of her life, she married Guy Shipley in 1944. After his passing in 1995 she moved to Bellingham in 1998 where she sang in the choir at the Garden Street Methodist Church and was active with The Academy for Lifelong Learning and the Bellingham Senior Center. An accomplished crafter, she participated in craft fairs at a number of locations and sold pieces in the Senior Center gift shop. She served as secretary on the board of the Cedar Grove Park Association for several years. Louise loved to travel and took many trips with both the Senior Center and the ALL. Alaska was her favorite destination, and she travelled there a number of times.

There will be a celebration of Louise’s life from 2 to 4 PM on Saturday, December 28 at Moles on Lakeway and Yew Streets. Donations Information

The family asks that any donations be made to The American Heart Association.