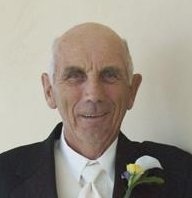 Lee was raised in Birch Bay, and attended school in Blaine. He married Olive Smith on February 17, 1950. Together they raised 4 children.

Lee had a big heart that reached out to help people. In the early sixties, when his friend was killed in a construction accident, he worked to bring in the crops for the widow. With his customers, the act of helping them was more important than the payment.

When his wife of fifty years became ill, he cared for her in their home, comforting and loving her with his whole heart. Recognized by striped bib overalls and an infectious smile, Lee will be missed around the front counters of the service stations that he worked on, and at the coffee shops with his lifelong friends.

Lee was preceded in death by his wife Olive in 2002.

In lieu of flowers, memorials may be made to Whatcom Hospice, 2901 Squalicum Pkwy, Bellingham, WA 98225.

A memorial service will be held Saturday, August 4, at 11 AM, at Laurel Baptist Church, 162 W. Laurel Road in Bellingham.