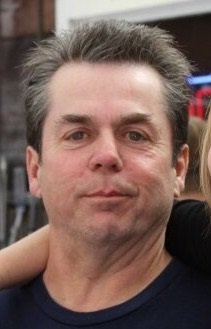 Kerry “Shorty” Lane Byrum, died Wednesday May 27, 2015, too young at 58 years old in Bellingham, WA
Kerry was born to George Franklin Byrum Sr. and Violet Editha (Byrum) Halldorson on August 7, 1956 in Bellingham, WA
He is survived by his daughter Danielle Byrum, wife Regina Charles and her children: Nicholas LaClair Raymond LaClair, Penny LaClair and Elizabeth LaClair and Grandchildren. Brothers: Donald Byrum, Kevin Byrum (Stacey), George Byrum and David Byrum. Sisters: Delores Howard, Lynne Buss (Delano), Candace Spady (Donald), Kristen Plank (Howard), Denise Niemi and Diana Johnson (Dana) and too many Nieces and nephews to name.
He is predeceased by his parents, brother, Richard Byrum and sister, Randee Byrum.
On August 7,1956, when George Sr. and Violet (Williamson) Byrum had the 9th of their 10 children, Kerry Lane Byrum. Little Kerry was born with his feet hitting the ground running. It didn’t matter if there was a door, a tree, or his brothers and sisters in the way; he put his head down and ran as fast as could to get through them. So, Kerry’s head was always bleeding. What stopped most people, never seemed to stop Kerry. He was on the go.

From a young age, Kerry was resourceful. Even though he was too young to understand that a dime was worth more than a penny, he would run over to the neighbors and pick their flowers. Then he would come back to those same neighbors and charm them into to buying their own flowers back. He was always up to some sort of hijinks. Usually it involved a money making venture. Sometimes those ventures got him in more trouble than they were worth.

As a teenager, Kerry moved from Bellingham to be with his older brother Kevin and his family in Ephraim, Utah. Shortly after he arrived, he began his sophomore year at Manti High School. He earned many academic awards and became a competitive athlete. Since academics came naturally to Kerry, he tutored others and earned the school’s Sterling Scholar Award. Kerry grew to only 5’4″ tall but, he never let that hold him back. He played football and wrestled. He got his nickname “Shorty” playing football. Despite being the smallest guy on the field, he amazed everyone with his ability. As a football teammate and friend said, “People called him “Shorty” out respect for a person small in height but, big in heart.” Kerry’s friends in school found him to be thoughtful, fun and hard working. When his older brother moved to another town, Kerry stayed behind working at a local restaurant as a dish washer and moved his way up to being a cook. He supported himself through his senior year while living in a hotel.

After high school, Kerry began his career in construction as a commercial concrete carpenter. He always took pride in being a hard worker. He worked on and off for his brother, Kevin, for many years. Other times, like most carpenters, he traveled to where the work was. From state to state, with tool bags in hand and hustle in his heart, he left a piece of himself in every building he helped construct. He ended his career working in Bellingham for Moncrieff Construction.

Kerry’s greatest pride was birth of his daughter, Danielle. He showed her off to anyone, and everyone. When he held her, he had the biggest smile on his face. He took the time to teach her about things he loved. By the time she was able to talk, he taught her about football. They would watch his favorite team, the Seahawks. He talked as if he knew every player on the field personally. She listened and learned. After a while, Danielle became a fan herself. For as long as she can remember, he was a Seahawks fan wearing Seahawks gear. “He wore his team through thick and thin.” As an adult, when she needed her dad, he didn’t hesitate and was there for her. He loved Danielle more than he had ever loved anyone.

Kerry spent many years moving between Utah, Nevada and Washington but, finally settled in Bellingham. After moving back to Bellingham, Kerry fell in love with Regina (Gina) Charles who, this summer, he had planned to marry. With her four children, Nicholas, Raymond, Penny and Elizabeth, they shared a life together for over a decade. He became a father figure, a teacher and a friend to Gina’s children and a grandparent to their children.

Since returning, Kerry was able to bond more deeply with his family. He became the person that pushed to get his brothers and sisters together for their “sibling dinners”. During those dinners, they would talk about their lives, laugh about things and rehash their childhood. He also became his sister Diana’s “go-to-guy” to help with their family. Whenever one of his brothers needed help or a place to stay, Kerry was there to help out. Not long before his passing, Kerry went to St. Louis to support his brother, George after a complicated surgery. He became the brother they could all count on.

A viewing will be held at Wednesday June 3, 2015 at Greenacres Memorial Park, 5700 Northwest Drive, Ferndale, WA from 6 – 9PM. A Celebration of Life will be held on Sunday June 7, 2015 at The Plank residence, 5142 Noon Rd from 1:00 PM until we are done.
In Lieu of flowers, we ask that you donate www.gofundme.com/vqsdeg to help Kerry’s family with expenses.