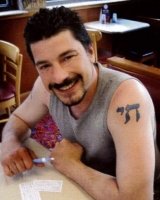 On August 20, 2013, we lost our beloved son Justin Gideon Lee Harrison to an accidental drug overdose. His family will forever be grateful for the kind, thoughtful treatment and close personal attention he received while in the care of the fine people at St. Josephs hospital in Bellingham Washington. There will be no service as his extended family is distributed across the United States and Central America. His final cremation is scheduled for the middle of next week dependant upon the Medical Examiners completion of required documentation (there was an autopsy performed)..

Our boy had struggled for 20 years with alcohol and drug addiction making recoveries and having relapses throughout that time but somehow we never believed his battle would end in such a pointless way. His passing was not in the patriotic service of his country, for a religious belief system or even a political ideology. His passing served only heinous, evil spirits intent upon the destruction of our youth and the very fabric of America as we know it.

Justin was ever ready to go on an adventure, particularly if fishing was involved. He loved the outdoors in all of its splendor and majesty. He was never much of one to experience life as an observer but would dive into the experience returning sometimes with dirty hands and feet but always smiling from ear-to-ear. He also had an abiding love of life and recorded music and was known to informally play harmonica. At special times he applied his talent to the polished Kudu shofar of which he was so proud.

He had also been pursuing a promotion career in the live entertainment industry booking both individual and group performance ensembles.

He had placed his faith in Christ Jesus (Yeshua) within the Messianic Judaism organization and we know we will find him waiting beside The Father for us at the gates of Heaven when our time comes.

Gideon is survived by his loving parents, two sisters, cousins and his niece and nephews. Sadly, he will not be with us at the expected birth of his newest nephew later this year. In our case we were fortunate to have maintained such a close connection with our boy throughout his entire life.

In lieu of flowers the family would appreciate contributions to an organization dealing with the harsh realities of drug and alcohol addiction he was very familiar with:

So many times these days we hear people say that drugs and those who would ply society with their poison should be treated with more lenient policies because they commit supposedly victimless crimes. While naked violence may not always be the result of drug use in every case, I only point to the hundreds of thousands of fathers, mothers, aunts, uncles, grandparents, brothers, sisters, wives, husbands and children of those living with a drug addicted person day in and day out and ask if they feel as though they are victims.

As survivors of this tragedy, his family most assuredly can testify to the pain and suffering caused by the passage of one so dearly loved. That, in my mind, is the very essence of being made a victim.

We would ask that in the future, when the opportunity to repel the effort to legalize or decriminalize chemical use comes to the fore, you all remember the loss of our son, Gideonand fight against that ever growing wave of stupidity and death.

We will continue to struggle with our loss and also ask that our friends lift us up in renewed efforts of prayer for the sending of The Comforter in our extreme time of need.

In lieu of flowers the family would appreciate contributions to an organization dealing with the harsh realities of drug and alcohol addiction he was very familiar with.