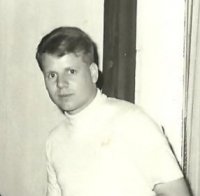 Jon Charles Snyder, retired Navy Chief Petty Officer, passed away on July 5, 2012 in Bellingham, Washington. He was preceded in death by his parents Bill and Freda Snyder, and granddaughter, Sarah Wood. Jon lived in Port Angeles, Washington for ten years prior to requesting to move to Blaine, Washington to be near his children and grandchildren where he resided for the past two years.
Born in Tacoma, Washington, Jon traveled the world to many Navy duty stations with his family. He lived in Adak, Alaska; Pensicola, Florida; Japan; Washington, D.C; Winter Harbor, Maine; Sabana Seca, Puerto Rico; Edzell, Scotland and retired in Fort Meade, Maryland.

Jon was known for playing, coaching and announcing sports events including baseball, volleyball, basketball, and football in high school as well as his Navy career. He will be remembered for his quick-witted sense of humor and love for movies and the television series M*A*S*H. He made everyone smile and was always quick to laugh, banter or provide an amusing comment. He cherished the many memories of his life and shared them often with his children, grandchildren, amazing care-givers and family friends. He will be remembered most as a loving father.