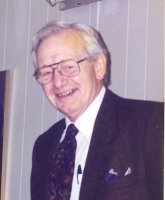 John Jack Robert Northey passed away peacefully Sunday evening June 30th, with his loving wife of 68 years Dorothea at his side. Jack was born in Newark, Ohio December 23, 1924. He and Dorothea met in high school, where he blacked both her eyes with a grease pencil for initiation into the drama club. They were married in 1945, and moved to Bellingham in 1946, upon his release from his service in the Navy. Jack worked several years selling mens clothing, first at Montgomery Ward, then at mens clothing stores, where he discovered a passion for and talent in designing and dressing the display windows. The promise of better pay prompted Jacks change of employment to Georgia Pacific, where he worked, with increasing responsibility, until his retirement.
With the soul of an artist, and the curiosity of a child, Jack continued to express himself creatively. He had started teaching himself to paint while in the service, and while continuing to learn and grow as a painter, he discovered fly fishing and the art and craft of tying flies. He began acquiring woodworking tools and developed a passion for wood turning. Jack sang all his life, and discovered a community of music lovers in the Mt. Baker Toppers Barbershop Chorus. He quickly became a prominent member of the chorus, singing in quartets, active in mounting performances and preparing for competitions, and eventually becoming the chorus director. Despite his varied interests, Jack still took time to participate in his childrens activities, from scouting to sports. The ties of friendship formed with fellow chorus members and with the members of the womens Sweet Adeline chorus, which he later also directed, became, along with his wood turning friends, his family, and church members, the core of his social circle and the joy of his life.
Preceded in death by his son Scott, Jack is survived by his wife Dorothea, his children, Anne, Glen, Bruce, Janet, Joan, Gail and Cora, twelve grandchildren and four great grandchildren.