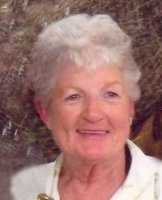 Janet J. Green age 78 passed Sunday July 1, 2012 in Bellingham WA. She was born June 26, 1934 in Hasting NE. Janet graduated from Bellingham High School in 1952 and graduated from St. Joseph School of Nursing in 1955. She worked as an RN for over 20 years and retired from WTA in 1996. Janet was a long standing member of the American Business Woman’s Association.
Janet is survived by her husband of 55 years, Glen Green. Daughter Debra Noyes of Lynden, sons, David “Brenda” Green of Ferndale, Douglas “Barbara” Green of Ferndale. Daughters, Vicki Aldelstein of Bellingham, and Conni “Tom” Curneen of Bellingham. Sister Stella Jordan of Bellingham. Grandchildren: Andrew Green of Lynden, Jennifer Green of Albuquerque NM., Cameron “Katie” Green of Andrews AFB MD, Melanie Green of Ferndale, and Kevin Green of Ferndale. And 3 great-grandchildren of Andrews AFB MD.
She was preceded in death by: Parents Ray and Ruby Haan, Father and Mother-in-law Harold and Ruth Green, Nephew Michael Green, Brother Steven Haan, Brothers-in-law Eugene Jordan, Alfred Green, and Homer Green.
Janet loved spending time with her children, grandchildren, and her great-grandchildren. She was an avid sports fan, enjoyed camping, cooking, was a talented knitter, and enjoyed volunteering at her church. Janet and her husband Glen spent many winters in AZ. Janet loved traveling in their motor home. They traveled to every state West of the Mississippi, and from Mexico to the Arctic Circle.
In gratitude for the loving care Janet received at Whatcom Hospice House, donations maybe be made in her name.
Whatcom Hospice house 2901 Squalicum Pkwy., Bellingham, WA 98225-1852
Graveside services will be held at 1:00 PM on Wednesday July 11, 2012 at Greenacres Memorial Park in Ferndale WA.
Moles Farewell Tributes
Greenacres Memorial Park