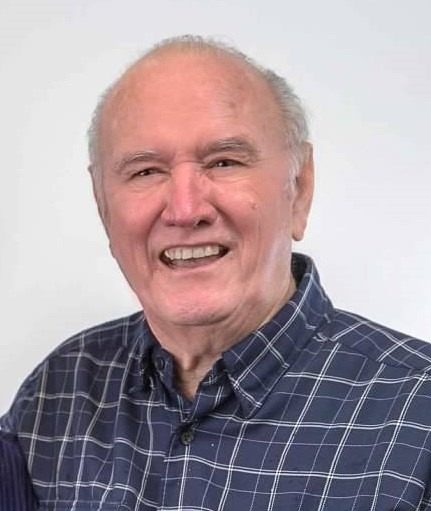 Over his lifetime, Jim worked in electronics, military intelligence, and education.  He wrote newspaper articles, recorded local histories, and inspired young people. He was a substitute teacher for many years and loved running into kids that he had taught. They called him “Grandpa Jim”, which he loved. Later on, one of his great passions was finding and recording the history of Blaine and the surrounding areas, preserving the stories for future generations.

Throughout his entire life, he held an unwavering faith in God, and was highly active in his church – Northwest Baptist Church in Bellingham, WA. He was loved for the way he served as church greeter, especially to newcomers, and he love doing it. Spending time with people, particularly kids and family, was very important to Jim. He was always quoting his sister Berta: “We’re FAMILY!”

He loved to walk and to talk, able to do both for great lengths of time.  He and his son hiked the Harriot Trail in England and it was one of his favorite memories.  He could tell you a story or just be funny, which ever you needed most. His greatest activity, though, was helping others. This is what he loved the most. He never met a stranger.

Jim was also a great listener. He loved to be with people and made everyone feel comfortable.  His corny jokes were so bad that they were actually funny.  He was usually the smartest person in any group, yet you would never know it, it was not important to him.  He was a jack of all trades and a master of most of them. He knew how to get things done and how to do them well. He even had amazing kitchen skills. He made wonderful pancakes, and big, chewy oatmeal cookies, and was famous for his potato candy at Christmas. Jim was incredibly loved by everyone, no matter the generation.

Jim was gentle, kind, upbeat, friendly, loving, humble and most importantly corny. Jim will be most remembered for his gentle love. As God promised in Revelations 21, he has gone home to his Heavenly Father (and is probably telling all of his puns to anyone and everyone).  He developed an interest in the Biblical prophesies of earth’s last days and came to believe it would be soon.

Jim is survived by his wife Anne; his children Susan (Sunshine) Lawson and her husband Scott, Forrest Zell and his wife Hilda; grandchildren Heather, Matt, Dustin, and Alexa; a great-grandson Skylar, sister Roberta (Berta), four grandchildren, one great-grandchild, and and many wonderful nieces and nephews.

In lieu of flowers, memorial donations may be made to Northwest Baptist Church – 3545 Northwest Ave. Bellingham, WA 98225.