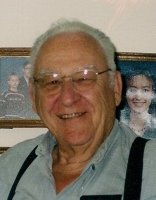 Born to Mary & Clare Fleming in Manitoba, Canada, he moved to Whatcom County at the age of 13 and graduated in 1942 from Meridian High School. He served in the U.S. Army and became a U.S. citizen at that time. He was stationed in the Philippines during World War 2. Elliott married Ann Larsen in 1947. They had many wonderful years together raising 3 boys and later traveling across the United States and to Norway. He worked as a printer for the Bellingham Herald for 15 years and farmed on the King Tut Road at the same time.

After leaving the Bellingham Herald he developed his 40 acres off King Tut Road to build houses and apartments. He and Ann later moved to Birch Bay Village where he built more houses and also ran a gravel business. After retiring he served on the Birch Bay Village Board and later managed the Village. There are many fond memories of parties on the beach in front of their house. He and Ann moved to Cordata where they lived for quite a few years. Elliott has lived at Meadow Green Retirement home in Lynden for the past 7 years.

Elliott was preceded in death by his parents and his loving wife Ann in 2005. He is survived by his son Larry (Ginny) of Tacoma, Ed of Bellingham & Hawaii, and Ron (Pat) of Lynden. He also leaves behind 10 grandchildren and 16 great grandchildren. The family would like to extend a heartfelt thank you to all of the wonderful staff at Meadow Greens and Hospice House.

At Elliotts request there will be no service. Donations Information

In lieu of flowers please send a donation to your favorite charity.