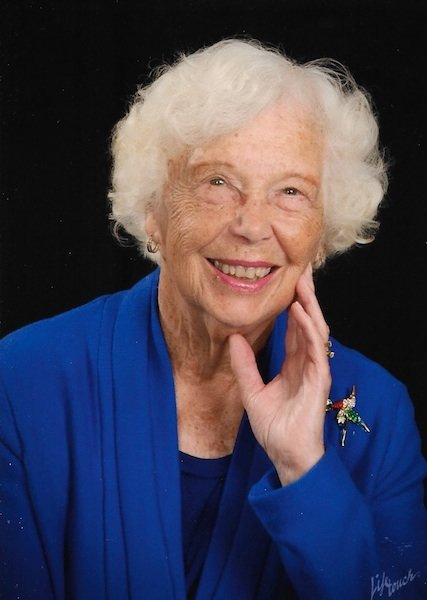 Ivaloe Luella Stillman Meyer was born on Shaw Island, 93 years and eight months ago, to George Henry Stillman and Eleanor Marold Bruns Stillman. Both her parents were born on Shaw Island and had met at the one room school house. Her parents moved to Bellingham, WA after marrying and were visiting Eleanor’s parents on Shaw when Ivaloe was born prematurely, possibly because Eleanor had measles at the time. Ivaloe’s grandparents’ home on Shaw had burned down and they were living in a small cabin on the point while rebuilding. She was delivered in the cabin by her grandfather and was kept on the warming rack of the wood stove. Ivaloe had one measles spot on her. The doctor came the next day from Friday Harbor, and said, “She’s dead of course…” and her grandfather said, “No she is fine!” This was the first showing of a quiet but strong fortitude and positivity shown throughout the rest of her life.

She grew up on Liberty Street in Bellingham, with her younger sister Mary Ellen and loving parents. Ivaloe had a happy childhood, playing with friends all over Sehome Hill. Her father was a marine engineer in the San Juan Islands, then later became a policeman and a detective in the new field of fingerprinting. Her mother was a loving homemaker. The house on Liberty St. was lived in for seventy-two years, until Eleanor’s death, also October 7, in 1996. Ivaloe was in the Pep Club at Bellingham High and active in Rainbow Girls. She attended Western Washington College (University) with a term at University of Washington to earn her teaching degree. At Western, she was president of the Valkyrie club and was the 4-quarter “man” on the student board. She took the man’s position because the men were at war. She began her teaching career in Everett in 1948. Ivaloe married Robert (Bob) Meyer in 1950 and by 1953 they had moved to Seattle and together they raised three children there. She went to Seattle Pacific University to renew her teaching certificate and began teaching again in 1966. Ivaloe taught for a total of 25 years, retiring in 1987. She was a kindergarten teacher at Bagley Elementary in Seattle for many years. She loved being a teacher and the friendships she made.

She was an active member of the Women’s University Club, the Delta Kappa Gamma Society, Rho Chapter, Children’s Orthopedic Guild, and Sand Point Community Methodist Church. She spent many happy summers at Deer Harbor, Orcas Island (on her cousins’ property, a place she had gone many summers all her life) with Bob, and was a member of the Deer Harbor Community Club and Orcas Island Historical Society, and had special friends she would see each summer there. She enjoyed traveling including trips to the Panama Canal, Mexico, Europe, once with good friends (The 3 Bobs) and around the country to visit her sister and family as they moved to interesting places in the military. Family was most important and there was many happy family gatherings. She had several special longtime friends, including the “non-bridge group”, who has been meeting for over 60 years. Their get-togethers were something she treasured, and rarely missed. She last hosted the ladies at her home in September.