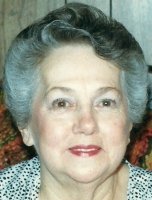 Hazel Campbell born Hazel Maureen Duncan to Byrd and Martha Duncan April 21, 1918, passed away in her sleep March 17, 2014. Hazel was preceded in death by her youngest daughter Judy Youso. She is survived by her son Jack Keller and daughter Arlene Houlgate and their families including 12 grandchildren, 19 great-grandchildren, 7 great-great grandchildren and numerous nieces, nephews and cousins. Her grandparents Chris and Karen Jorgensen homesteaded in the Mosquito Lake area of Deming, WA in the 1800’s.
Hazel was active in the Ten Mile Grange, the Red Hat Society, was a Past Matron of Eastern Star and a member of the Lord’s church that meets at the Portal Way Church of Christ in Ferndale. Professionally she was known as a great cook. She worked at the Horseshoe Cafe of Bellingham in the 40’s and at Boeing Airplane Company as a riveter, then a Quality Inspector in the 60-70’s. From 1978-1986 she cooked in Barrow, Alaska High School, in Metlakatla, and as an Alaska state employee taught cooking in numerous places around Alaska. She was often asked to make pies or fudge candy. We also remember her as a farmer raising chickens, pigs and growing a large, wonderful garden to support family and friends with food. What we didn’t eat fresh, she canned and froze for later use.
One thing she was always careful to say was, “Bye for now”. For Nana, saying goodbye was too final, too simple. When she said “Bye for now”, it was a solemn promise that I care about you and I will think about you while we are apart. I am nearby and you can call me if you need help. I will return when I can.
Her spirit of love and support was what she tried to convey to everyone around.
She was the matron of our family and we will miss her greatly.

There will be a viewing for Hazel at Moles Greenacres, 5700 Northwest Dr. in Ferndale, WA on Thursday March 20th from 5-7pm. Please send flowers by 2pm for the viewing, or flowers may be sent to the Portal Way Church of Christ (6300 Portal Way) for the memorial service on Friday. There will be a graveside service at the Saxon Cemetery on Friday March 21st at 10am with a memorial service the same day at the Portal Way Church of Christ at 2pm, reception following.