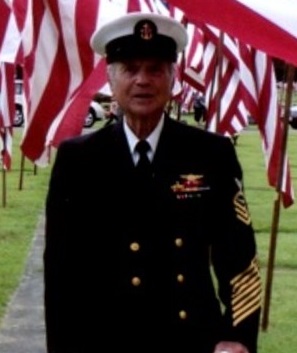 Neil Stamey died the day after Christmas at 98 years old. Raised on the family farm near Clarkesville, Georgia, he enlisted in the Navy and was proud to serve in the Pacific during World War II, then also Stateside during the Korean War. He later served for many years in the Naval Air Force, and he loved the chance to visit countries like Spain, Greece, and Morocco. His superior officers described his service in the reserves in glowing terms.

Neil met the love of his life, nurse Helen Louise Weihe (3rd generation here in Whatcom County), when his naval ship docked in Bellingham, and they were soon married. He is survived by his four daughters – Pamela Florence Steenmeyer (married to John); Gail Marie Roberts; Sara Lucinda Stamey (married to Thor Hansen); and Susan Kay Smeall (married to Bill) – as well as many grandchildren and great-grandchildren.

Neil retired after many years working as a machinist at Mobil Oil/BP Refinery in Ferndale, WA. He was an avid outdoorsman, hunter, and fisherman, who took the young family on many camping and trailer trips to explore our Western states and British Columbia. The whole family participated in developing his gold-mining claim at Ruby Creek in the wilderness of the North Cascades, before road access, where they built a log cabin and enjoyed many fishing and gold-panning trips. Neil stayed amazingly active until recently, tending his and Helen’s home and parklike acres, where he also loved caring for his dog, cats, and goats.

An outdoor memorial service with military honors will take place at Greenacres Memorial Park in Ferndale. Due to the Covid virus, there will not be a reception following.