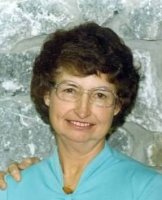 Grayce Eldora (Belew) Potts went home to be with her Lord on October 12, 2013 at the age of 92. Grayce was born in Mountain View, Missouri on August 28, 1921 to John Otis Belew and Ida Thomas Belew. She attended Mountain View Schools where she enjoyed spelling bees and girls basketball. She was the last survivor of all 15 of Johns and her siblings and their spouses. At age 18 Grayce moved to St. Louis to become a beautician and worked there until she was married. She re-activated her license in 1960 and for many years operated Grayce Beauty Shop in Everson where the most recent community news was available. Grayce married John Potts in Biloxi Mississippi in 1943 during Johns term of service in the Army. Their first child, Sandra, was born in Laredo, Texas. At her death Grayce had 14 grandchildren, 28 great-grandchildren and 6 great-great-grandchildren.

In the mid-1940s Grayce and John moved to Whatcom County along with three of Johns siblings and their families, Roy and Pearl Wood, Claude and Toddy Potts and Sam and Jane Smith. Being from agrarian roots, all became farmers, primarily in berries. Most also had other occupations. Success came from faith, hard work and honesty. Grayce was tireless in helping others and was a hard worker of long hours commencing at dawn. She served full breakfasts. She canned fruits and vegetables from Johns massive garden and eastern Washington. For a number of years the family operated a 20-acre farm with milk and beef cows, raspberry fields and 1000 laying hens. Over the years they were members of Evergreen Community Church in Ferndale, Nooksack Valley Baptist Church in Everson and Lynden Grace Fellowship in Lynden. After retiring, John and Grayce lived on Bonanza Drive in Lynden for many years enjoying Johns garden and their grandchildren.

A graveside and memorial service will be held for Grayce on Friday October 25, 2013 at 1:00pm at Moles Farewell Tributes Greenacres, 5700 Northwest Dr, Ferndale, WA 98248. Donations Information