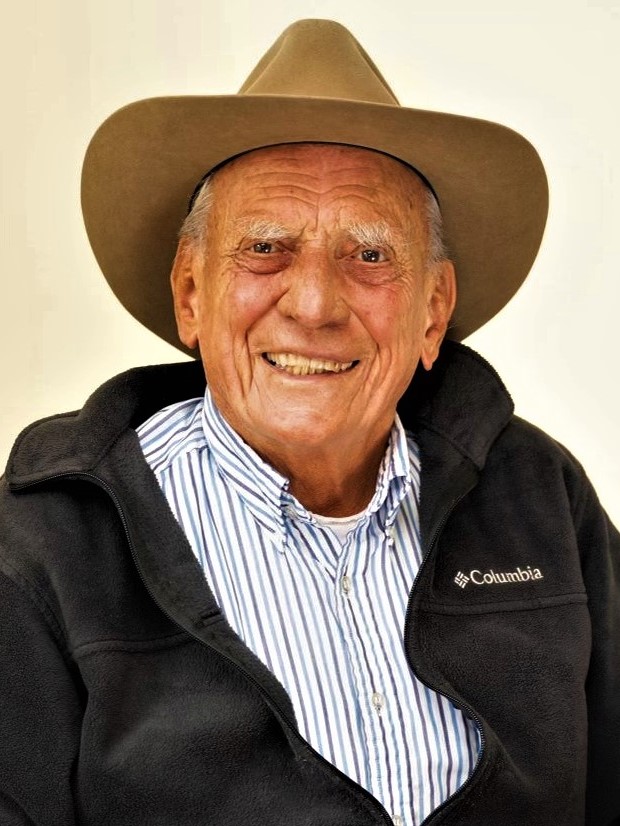 George Aylett Reimann, 90, died peacefully in Bellingham, Washington on June 26, 2022, with his daughter by his side.

George grew up in Wynnewood, Pennsylvania, the son of Dr. Hobart Reimann and Dorothy (Sampson) Reimann. In his boyhood, he meandered through the woods and caught bullfrogs and snakes on the banks of Mill Creek.  As a teenager, George bottle-fed and raised a baby raccoon, “Ricky,” who became a mischievous part of the family. The family’s maid allegedly adored Ricky, yet one day in a moment of exasperation, she deposited the critter at the local zoo. George rescued Ricky from the zoo and brought her home on the train. When she escaped her basket, she ran around the train car, to the horror of the other passengers. Pet crows and other animals also enriched his boyhood years. During the summer of 1950, he worked horses with his family at an Idaho dude ranch and developed a love of Idaho and western attire.

When his step-mother Cecilia joined the family, she decided that George’s rough edges needed some polishing and directed him to Haverford School after he graduated from Lower Merion High School. George then spent a summer working road construction on the Pennsylvania Turnpike. To the relief of his father, the hard labor made college look more appealing to George who then chose to attend Penn State. Initially studying liberal arts, he found metallurgical engineering to be a better fit and never looked back, graduating in 1956.

While working at Westinghouse in Blairsville, Pennsylvania, George met Joan Field. They married in 1960 and started a family, raising 3 daughters, Barbara, Linda, and Julie. They relocated to Ohio, Tennessee, and eventually Idaho Falls, Idaho. He and Joan later divorced. George lived in Idaho for nearly 50 years.

When explaining his work, he described himself as “a blacksmith with a degree.” His career in engineering yielded multiple patents. He was an author of 38 publications during his employment with contractors of the U.S. Atomic Energy Commission and the U.S. Department of Energy. He earned his master’s degree from the University of Idaho in 1986. He worked for the Idaho National Laboratory for over 20 years, retiring in 1994.

George was an expert rifle marksman. He served in the Army National Guard at Aberdeen Proving Ground and Camp Perry. In 1960 at the summer training camp of the 28th Division at Indiantown Gap Military Reservation, he captured the shoulder-to-shoulder marksmanship matches as the top scorer with the M-1, firing 209 of 210 points. Also in 1960, his team won the Hilton Trophy at the National Matches at Camp Perry and set a record for a National Guard Team. He was awarded the Adjutant General’s Trophy for the highest individual score in the Army National Guard .22 Caliber Rifle Matches during the 1960 calendar year. In civilian competitions, he was the Tennessee State High Power Rifle Champion in 1966, 1967, and 1971.

In addition to target shooting, his hobbies included gold panning, leather work, geology, and photography, and he was active in politics. He panned for gold on the Salmon and Snake rivers in Idaho, building a sluice box from an old washing machine, black corduroy and pieces of plastic. He said there was no secret to his success in extracting gold from sand in a sluice box, stating “all you have to do is put in the right kind of sand.”

George’s love language was acts of service. He saw himself as a provider and took that role very seriously. He spent as much time as needed at the kitchen table helping with math homework. At Halloween, he would walk as far as his daughters wanted for trick-or-treating. He would go on any ride at the fair.  He was a dedicated driver of long distances as he helped his children move to college and relocate to other states.

He had a level temperament, often stoic, but also gentle. He was known for his sense of humor and never keeping a pun to himself. Since his death, many who were fondly acquainted with him have said, “He was a storyteller.”

During the height of the pandemic in 2020, he moved to Bellingham, Washington to live with his daughter Julie and her family. During that time, his love of music became more evident as he particularly enjoyed listening to his grandson play the piano and he occasionally sang along. George later joined the community at Brookdale Fairhaven where he thrived.  He often raced down the hallways with his walker to sit in the sun, managing to achieve a rare Pacific Northwest tan before June! George and his family appreciated the love that he found among his friends and the staff at Brookdale in his final year of life.

Private services will be held at a later date.