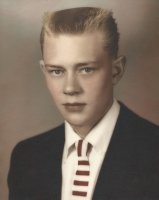 Gary is remembered by many for his good-natured sense of humor. His kindness and friendly personality attracted many visitors to his household over the years. He could often be found helping his boys complete a project on a car. One of his favorite activities was attending their sporting events.

In his later life, he embraced the computer age whole-heartedly. He often participated in blogs, where he loved to enter into dialog, often humorous exchanges, on a wide range of political topics. He also enjoyed keeping in touch with his family and friends through email. Garys mind remained sharp to his final days.

His family moved to Bellingham in 1942, where he later graduated from Bellingham High School in 1954. He attended Bellingham Success Business College and also received training at Western Washington University.

He joined the Army National Guard in 1952, where he was a member of the Anti-Aircraft Artillery, the Field Artillery Military Police and Combat Engineers. Serving as First Sergeant for seven years, he retired as a Master Sergeant from the U.S. Army. After military retirement he accepted a commission as a Captain from the Washington State Guard Militia for two years.

Gary worked at the Morse Hardware Company as a Store Merchandiser-Outside Sales Representative for 10 years. He later became a Staff Supervisor of Central Stores at Western Washington University, from which he retired in 1991.

He was married to Diane Behme (now Scansen) from 1959-1975. Gary married Nadean M. Dunkin-Little (Grim) in 1976 and the two remained faithfully together until his passing.

Funeral Service will be Friday, December 14, 2012, 12:30 p.m. at Greenacres Memorial Park, 5700 Northwest Drive, Ferndale, WA 98248. Gary professed Faith in Jesus Christ as his Lord and Savior. At the request of family, memorials should be made to the Salvation Army Church. The family expresses gratitude and appreciation to Hospice and Visiting Angels. Please view the memorial and sign the online guest book to share your memories of Gary.

At the request of family, memorials should be made to the Salvation Army Church.