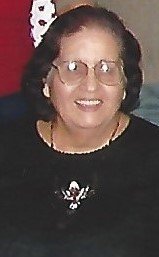 Faunt Arlene (Lorenz) Visser passed away peacefully at Grace Manor adult family home on February 12th. Faunt was born to Adolf Lyman and Effie Mary (Plaster) Lorenz in Bellingham, WA. She graduated from Bellingham High School with athletic prowess and accolades and worked a year at the YMCA before joining the Women’s Army Corp with her sister Carmen and a couple of friends in 1950, following the footsteps of her father and brothers. Faunt proudly served for three years, trained as a postal operative, spending part of that time overseas working in the 1056 73 Army Postal Unit. During that time she was table tennis champion while stationed in Germany.

Faunt was honorably discharged in 1953, returned home and met the love of her life, Harold F Visser, and they married a year later. They lived in rural Whatcom County near south Lake Whatcom and soon after took in Harold’s two daughters, Susan and Toni. She and Harold later had three children; Deborah, Donald, and Patricia.

Faunt was an avid gardener; maintained and sold organic raspberries; grew, canned and preserved foods to feed her family; and was involved in the South Lake Whatcom Fire District #18 as a volunteer firefighter; and participated in the Fire Belles, making and selling items at Christmas bazaars to pay for equipment. She was also known for her beading, especially her beaded, woven-off-the loom hummingbird and eagle necklaces, no two were the same.

Faunt was preceded in death by her husband and parents, brothers Melvin and Darvine and sisters Mildred, Phoebe and Carmen. She is survived by her children Deborah (Lani) Mele Mai, Donald (Jaylene) Visser, Patricia (Ray) Jones, and Harold’s daughters Susan (Rick) Klander and Toni (Ed) Feller. She is also survived several grandchildren and great-grandchildren.

Funeral and graveside services will be held 10 am Friday, February 16th at Greenacres in Ferndale, WA. A gathering will be held at Lummi Veterans Hall at 2608B Kwina Rd to share stories and a meal. The family would like any donations in Faunt’s name to be made to Whatcom Hospice House or to the South Lake Whatcom Fire Department, contact info for both is available online.