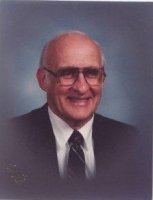 Eugene Roosma has ended his earthly pilgrimage on January 12, 2014 and entered into his heavenly home made possibly by the incredible grace of our Lord Jesus and the unfailing love of our Heavenly Father. Gene lived for the last month in Harborview Medical Center in Seattle as he struggled to overcome complications after surgery to repair an aortic aneurysm.

Gene was born at home on the Benson Road, November 6, 1930 to James and Jennie (Bouwman) Roosma. He enlisted in the Navy in July of 1952 and served for 4 years. Gene married the love of his life, Elsie Broersma, on May 18, 1954. He worked for Georgia Pacific for 40 years and in retirement enjoyed raising and selling gladiolas to local florists.

Gene was an active member at Mountain View Christian Reformed Church where he had served as an elder.

He is survived by his wife, Elsie; children Harvey and Kathy, Gary and Jennifer, and Jayne and Gary Bourdon; 7 grandchildren and 3 great grandchildren.

A viewing will be held on Friday, January 17, at 7:00pm at Moles Farewell Tributes in Lynden.

Burial will be at Ten Mile cemetery for family on Saturday, January 18, at 1:00pm.

A memorial service will be held at Mountain View Christian Reformed Church at 2:00pm on Saturday, January 18 Donations Information

In lieu of flowers donations can be made to Whatcom Hospice Foundation or Lynden Christian Schools. Donations Links: