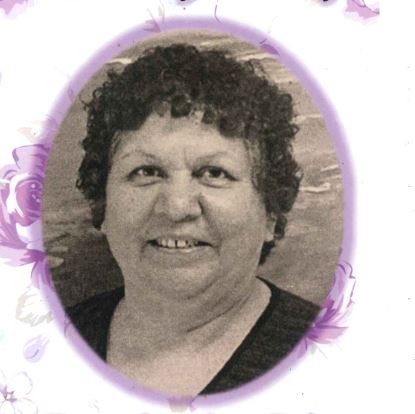 Ernestine was born on September 17, 1944 in Bellingham, Washington to Ernest and Evelyn Jefferson. She grew up in fisherman family and spent much of her childhood living on the West Side Village of the Nooksack River along with many other Lummi families. She grew up in a small one-bedroom shack with her parents and seven siblings. As a child, she attended the Lummi Day School and eventually the school was shut down by the Bureau of Indian Affairs and she was forced to attend Ferndale. Since her father often traveled for seasonal construction work, the family would pack up and move and she was unable to finish high school.

When she was just 17, she met Flavian Point Sr. of Musqueam through mutual friends and that is where their love story began. After being together for a short time, Flavian respectfully asked her parents for her hand in marriage and they got married in October of 1962. She eventually moved to Musqueam with her husband and together they built a beautiful family of seven children. Throughout their time together, they would often pack up their children and move back and forth from Musqueam to Bellingham. When their children were young, they ended up moving back to Bellingham to pursue higher education.

She received her bachelor’s degree in Anthropology from Western Washington University in 1996. Soon after she completed her degree, she began her journey as an educator. After teaching for many years, she earned her master’s degree in Anthropology from Antioch University in 2013. She had a huge passion for education and encouraged all of her children and grandchildren to finish high school and pursue higher education. She spent 30 plus years at the Lummi Nation School teaching cultural arts, Lummi Language and traditional cooking. She has touched the lives of so many students throughout her years and will be missed in her classroom by her students and colleagues.

On January 13, 2021 Earnestine passed away peacefully in her family home surrounded by her children. Her family and community will miss the amount of knowledge that she held and will forever remember all that she has shared throughout the years. Being the amazing teacher that she was, her legacy will live on forever. She will be missed by all who had the opportunity to know her.

Ernestine is survived by her children: Darrel Point, Dominic Point Sr., Andrea Point, Verna Peters and her husband Brain, Flavian Point Jr. and his mate Wilettea George, and Deanna Point and her husband Joe Morris. Her siblings: Josie Jones, Alex Jefferson and his mate Anjanette, Merle Jefferson Sr. and his wife Phoung and Elaine Lane and her husband George. Ernestine spent much of her time with her grandchildren and had a special bond with each and every one of them. Together, her and Flavian had 22 grandchildren and 38 great-grandchildren. She also has numerous nieces, nephews and relatives who held her dear to their heart.

Ernestine is preceded in death by, her husband: Flavian Point Sr., her daughter Loretta Point, her grandchildren: Iris James and Kadejah Hawk, her parents: Ernest and Evelyn Jefferson, her brothers: Ernest “Scrap Iron” Jefferson and Jeffery Jefferson and her sister: Brenda Jefferson. Ernestine is also preceded in death by her grandparents, Edward and Julia Jefferson of Lummi and George and Alice Williams of Upper Skagit and comes from huge families of both sides.

A graveside service was held on Monday, January 18, at Noon at Lummi Nation Cemetery.